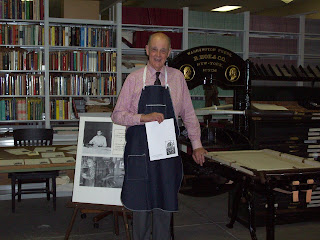 Dr. Welford D. Taylor, America's leading scholar on the work of woodcut artist J. J. Lankes, spoke to the Friends of Tampa Book Arts Studio at the University of Tampa Library April 1.
Dr. Taylor described some of the formative events and influences upon Lankes as an artist and printer. During his talk, he illustrated major subjects, styles, and techniques in the work of Lankes by showing original prints from the Book Arts Studio Special Collections. He also had brought two original Lankes woodcut blocks from his personal collection for those attending the event to inspect.
The talk was followed by informal conversation and refreshments, with a chance for everyone to more closely examine the selection of prints and the original blocks.
Then those attending were invited to the Book Arts Studio in the Library Annex to print a keepsake: a French-fold notecard featuring J. J. Lankes's “Bee and Clover" woodcut, which each participant printed on Lankes's 1848 Hoe Washington Press. In the photo Dr. Taylor stands at the Lankes press with a copy of the printed keepsake. The display board near the press includes a photo of J. J. Lankes in his studio in 1926, and a later photo of his son, J. B. Lankes, at work on his father's press.
Posted by Tampa Review & Tampa Press at 5:07 PM No comments: