A Tiny and Tremendous Milestone 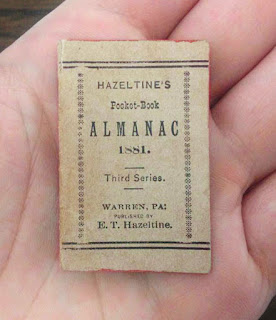 The Tampa Book Arts Studio’s Library Collections took another big step forward this week as J. B. Dobkin added a milestone item to the group of letterpress miniature books in our Book Arts Studio Special Collections. Jay has just donated a tiny but significant miniature almanac that completes our holdings of the thumb-sized Hazeltine’s Pocket Book Almanac through 1905.

The new addition is Hazeltine’s Pocket Book Almanac for 1881, and it completes our collection of the quaint miniatures, starting with the first publication of the tiny almanac in 1879 through all the annual editions up to its continuation as Piso’s Pocket-Book Almanac in the early twentieth century up to 1905, the arbitrary date we tentatively set as the cut-off for our initial Victorian miniature collection.

The unusual Hazeltine miniatures measure just 1 3/8 by 2 inches and are of interest for a variety of reasons: noteworthy as letterpress printing, miniature books,  early advertising art, and pure Americana.

The first edition of the almanac appeared in 1879 from the E. T. Hazeltine Company in Warren, Pennsylvania. It resulted from a partnership of Ezra T. Hazeltine, who was something of a marketing genius, with Dr. Micaja C. Talbott—also a Warren, Pa., resident—who had developed a formula for a patent medicine for consumption and other maladies. The two men decided to go into business together with a third partner, a wealthy Warren businessman, Myron Waters, who would provide financial backing, forming Hazeltine & Company, with Ezra as president. It seems to have been Hazeltine who came up with the name for Dr. Talbott’s formula: “Piso’s Cure for Consumption.” 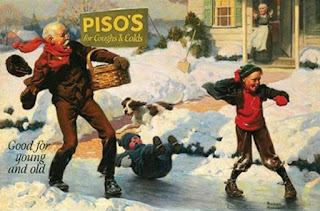 The Pocket-Book Almanacs were promotional items for the Piso’s products, given away in drugstores to promote, in particular, “Piso’s Cure for Consumption” and “Piso’s Remedy for Catarrh,” patent medicines distributed by druggists. The formula was patented and protected, but seems to have contained alcohol, cannabis, and chloroform, among other ingredients. Ezra Hazeltine’s marketing, perhaps combined with a formulation that surely could make one feel good, resulted in increasing sales.  And the promotions, not only through the almanac, but with trade cards, postcards, and advertising—including at least one by famed illustrator Norman Rockwell—were effective, and often charming. 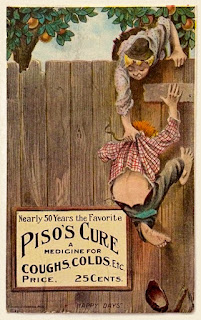 Hazeltine’s miniature almanac continued after 1895 as the Piso Pocket Almanac, published by the Piso Company of Warren, Pennsylvania.  Every almanac included a monthly calendar, with dates for eclipses and seasonal changes, together with testimonials from readers who were cured of coughs, asthma, bronchitis and hemorrhaging of the lungs by the Piso products.

It seems to have stopped publication after the First World War in 1919. With the first twenty-two volumes of the almanac in our collections now complete, we hope to extend our collection forward to add the last fourteen individual pieces with the help of generous donors to complete the lifetime array of the fascinating little American almanac.
Posted by Tampa Review & Tampa Press at 2:40 PM 4 comments: