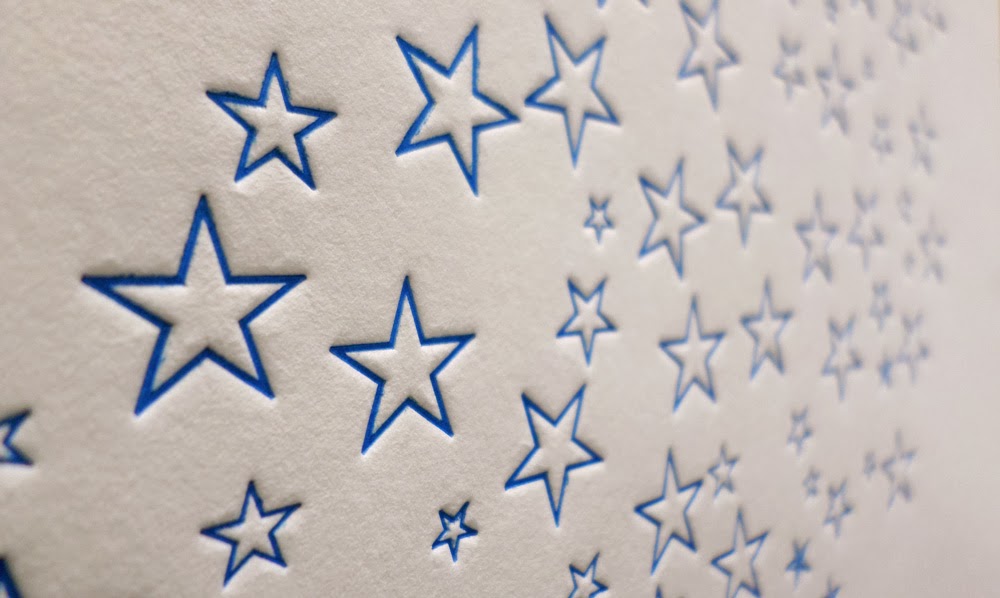 The Tampa Book Arts Studio associates were literally “seeing stars” recently as they played host to more than eighty graduate students in Creative Writing. They were here as part of the low-residency MFA program that draws students from all over the world to take part in an intensive ten-day residency of lectures, writing workshops, seminars, and readings. And the stars were being freshly cast in type metal as part of the celebration.


The student visit to the TBAS began in the early afternoon with a presentation by the Studio’s director, Richard Mathews, offering a broad overview of the history of the written word and its printing and publishing developments through time. In a later presentation given to third- and fourth-term students, more advanced topics were discussed. These included questions about the long-term effects on reading habits as a consequence of increased consumption of digital and  web-based texts. He described issues raised by Nicholas Carr in The Shallows: What the Internet is Doing to Our Brains, which include preliminary evidence that there is a subtle (and subversive) training of the brain by digital culture to interact with digital texts in fast and superficial ways, with a consequent loss of deep thought and craftsmanship in digitally-created texts. He concluded the presentation by referring to historical and modern writers-as-publishers, reminding them that writers themselves can have a deep and profound impact in shaping how and what we read.

Following the presentation, the students tried their hands at traditional book crafts. Kendra Frorup and Carlos Camargo Vilardy, of the UT Art Department, showed them how to create paste papers and marbled papers, and Bridget Elmer—of The Southern Letterpress, Gulfport, Florida, and Coordinator of Ringling College of Art and Design’s Letterpress and Book Arts Center—gave demonstrations on book binding, case binding, and pamphlet stitching. 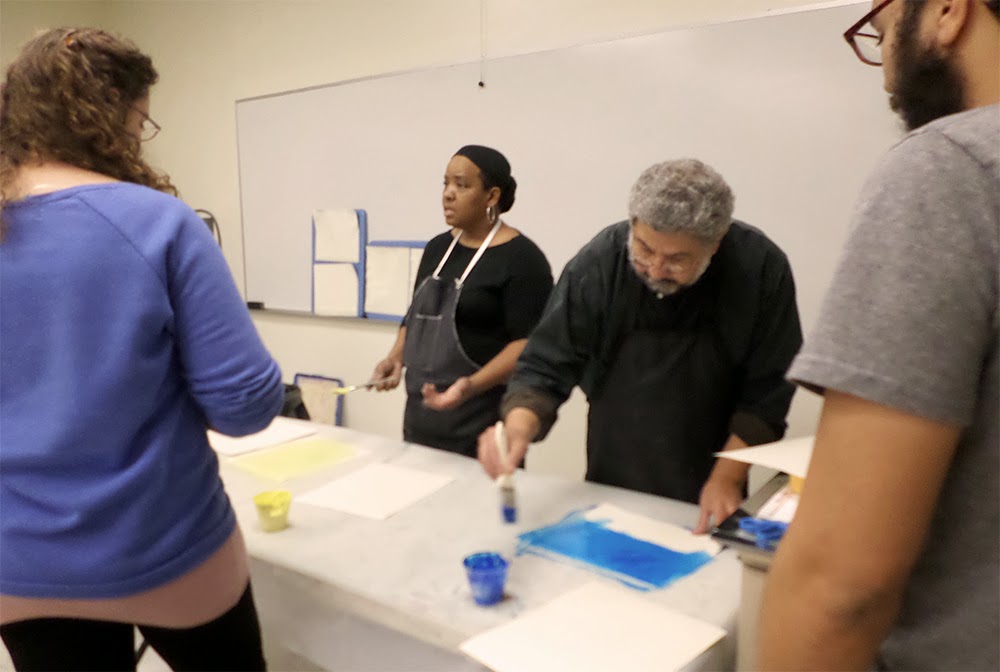 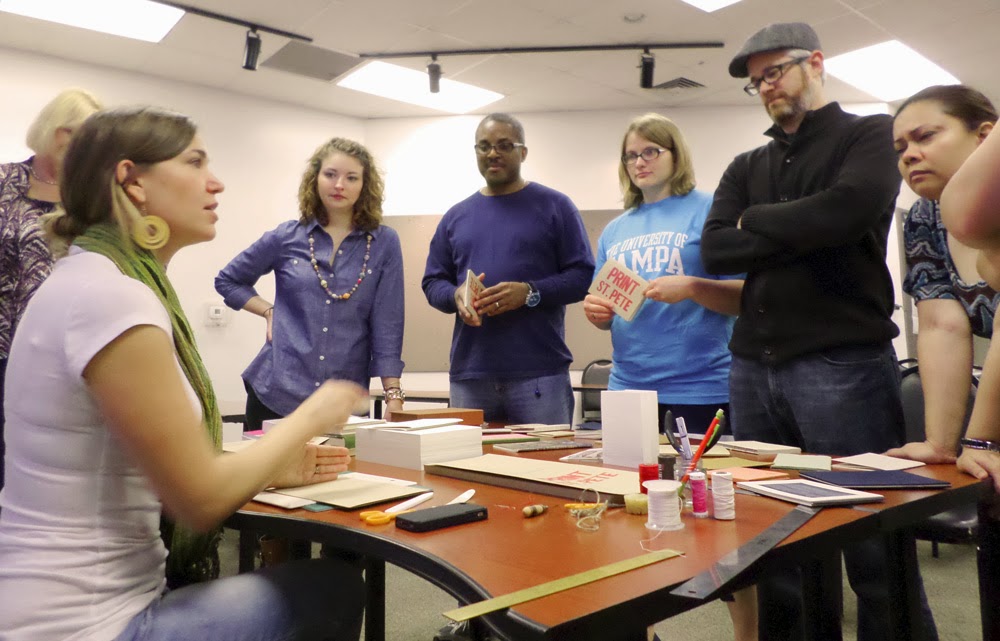 Meanwhile, at the letterpress studio, students visited three stations that represent the craft of letterpress printing. First, Dr. Mathews explained Gutenberg’s method for casting individual pieces of type by pouring molten metal into a hand mold, sorting it into a case, and setting it into lines by hand. 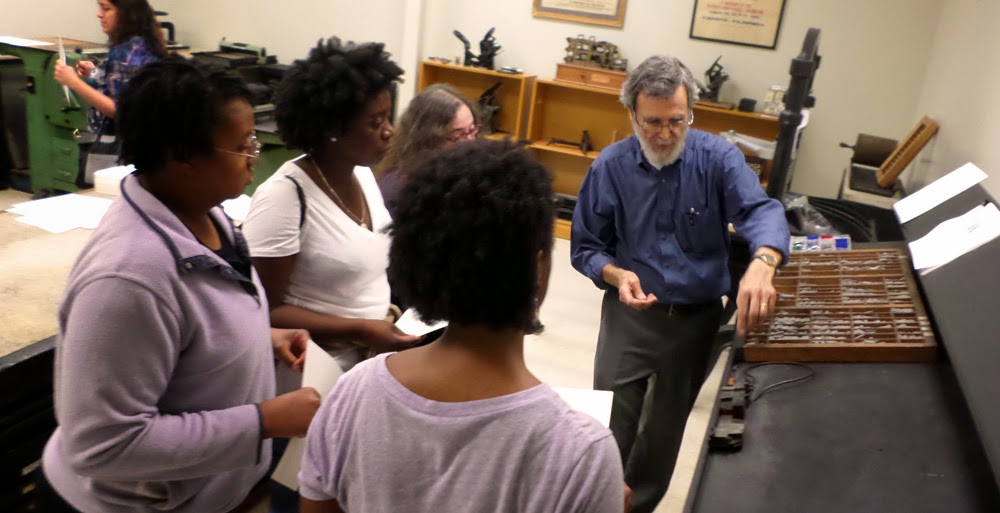 At the second station, Joshua Steward of UT Press ran a vintage 1920s Monotype Sorts Caster (the “Orphan Annie”) which mechanized the casting of individual letters and decorative pieces. Students could choose one of three different 18-point star ornaments to be cast on the machine and kept to commemorate the event. 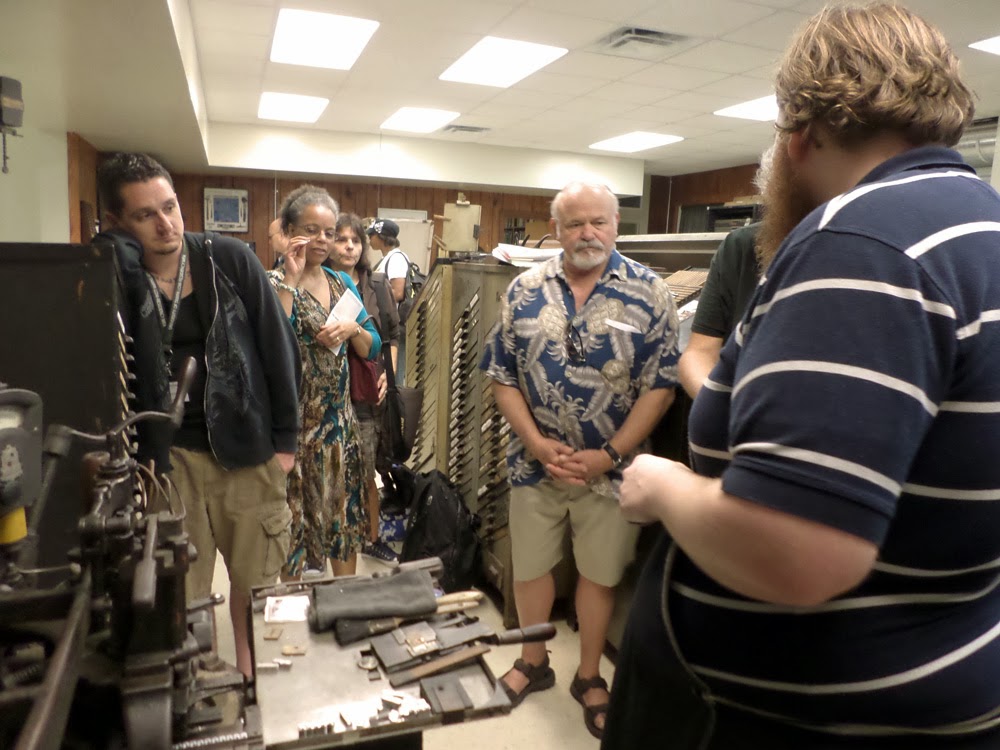 Two of those three ornaments were used on a broadside, created by the TBAS staff in preparation for the event, as another keepsake for the students. As part of the tour, each student printed, with the help of TBAS Letterpress Coordinator Carl Mario Nudi, the second and final run of the commemorative broadside on the Vandercook. 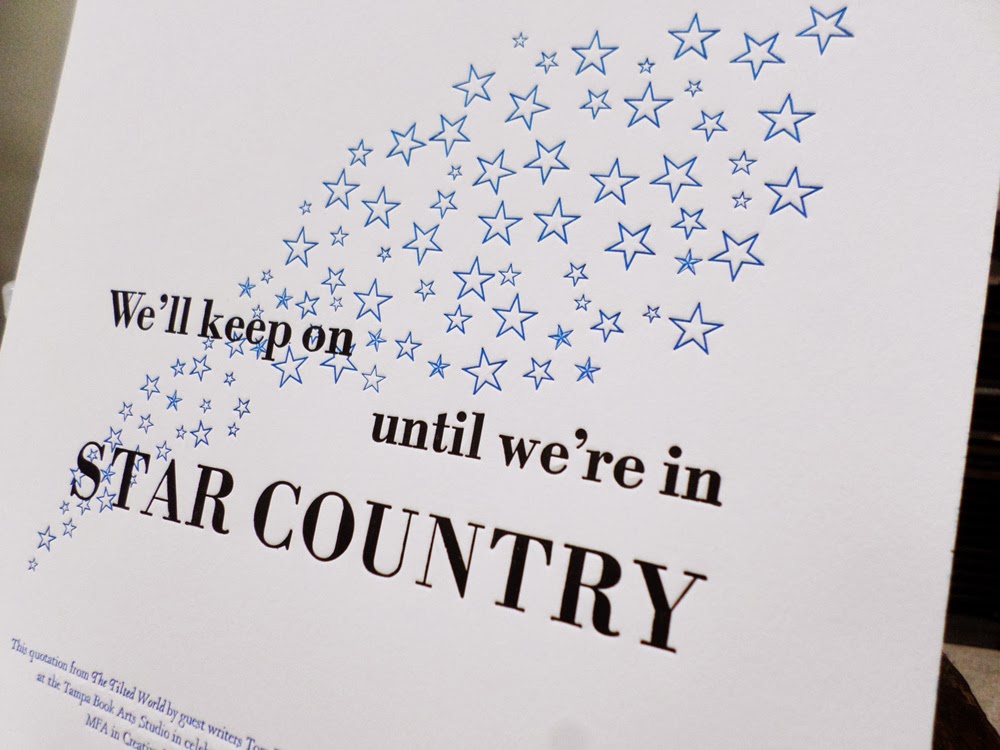 “We'll keep on until we're in star country”

The concept of the broadside's design was multi-purpose: the quote used—“We'll keep on until we're in star country”—is taken from a quiet moment of dialogue between two characters in the novel The Tilted World, by Tom and Beth Anne Fennelly, visiting authors for the Residency who gave a reading for the students later that evening on campus; additionally, as this semester marks the completion and graduation by the students of the inaugural cohort of the MFA in Creative Writing program, these graduates are the first to take the knowledge they've gained and strike out into the expansive world of creative writing and other fields of their interest—each reaching for their own “star country.”

Stars and display type were cast on the Ludlow and Monotype Casters, with the colophon handset; the broadside was printed with process black and tinted-blue inks on Crane's Lettra Pearl stock. 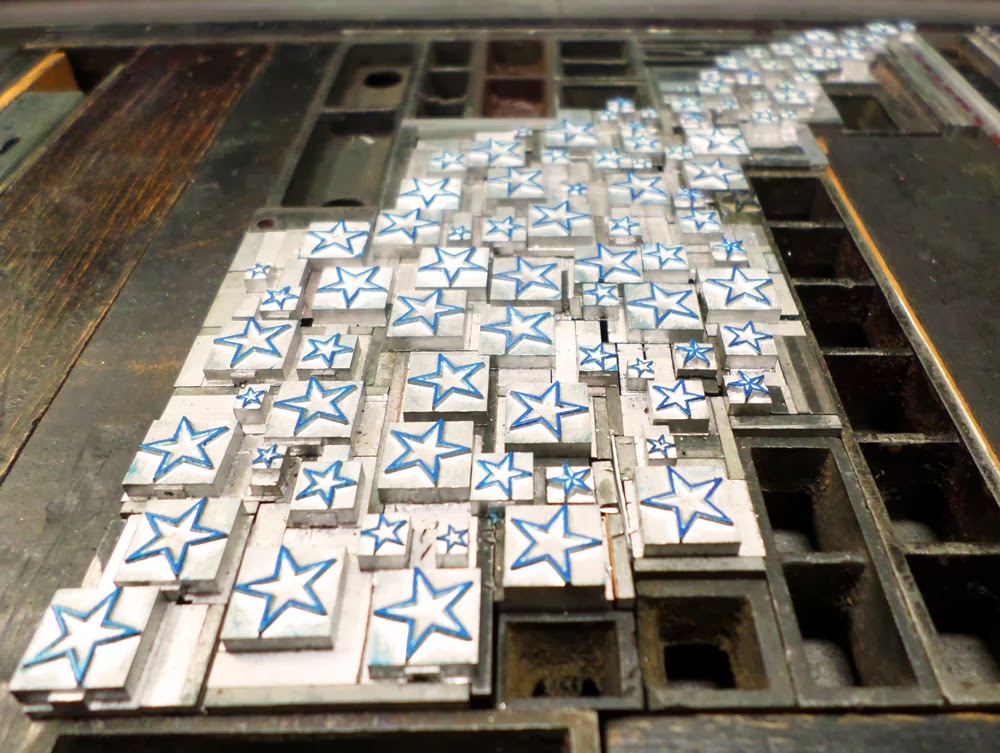 Thanks to Rich Hopkins for the loan of his star Monotype matrices,
and to Kendra Frorup, Carlos Camargo Vilardy, and Bridget Elmer
for their time, effort, and willingness to share their extensive knowledge.
Posted by Tampa Review & Tampa Press at 4:56 PM No comments:

A Gift of Fine Books from Lee J. Harrer Enriches and Deepens Our TBAS Library 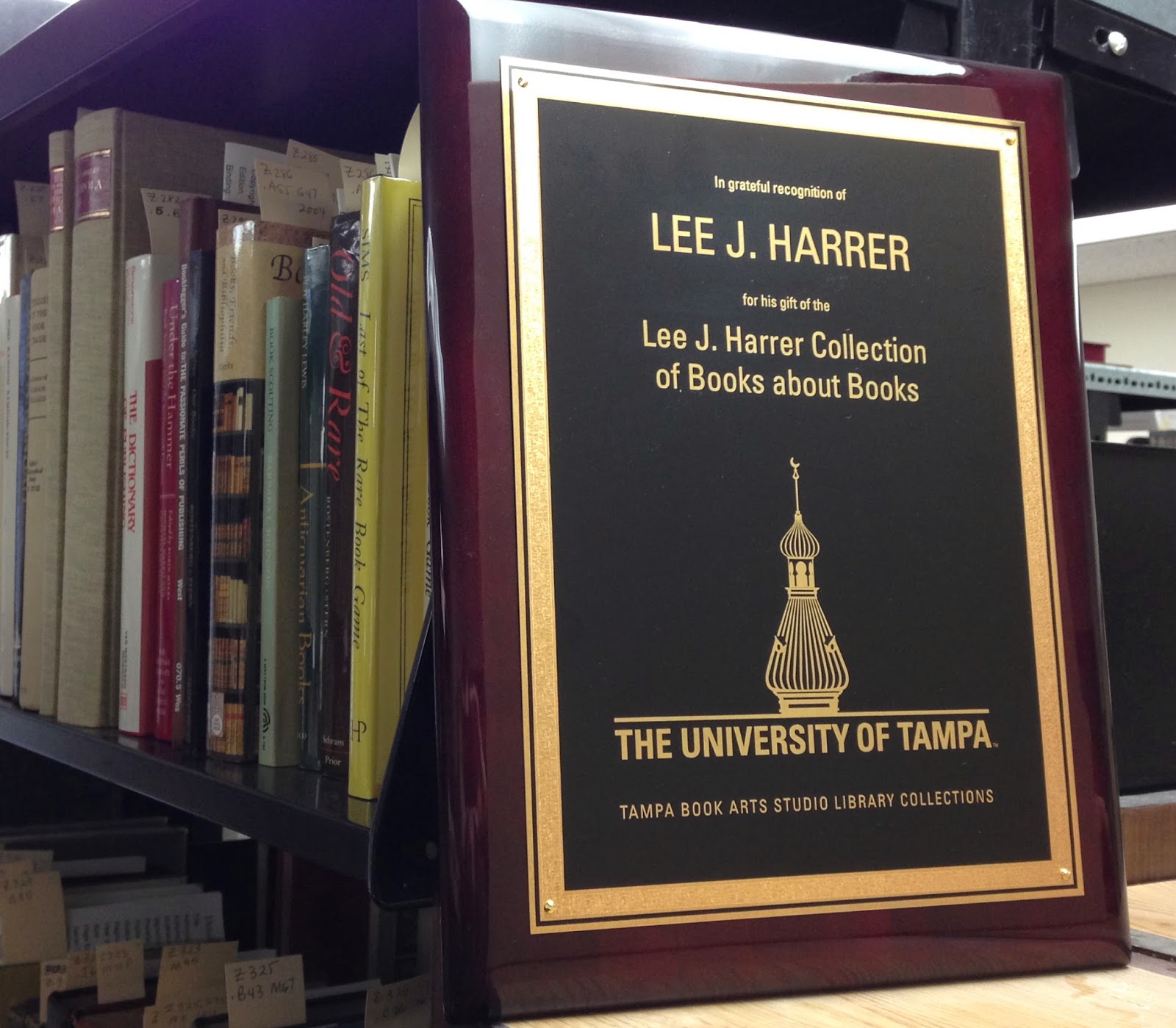 A SIGNIFICANT DONATION by bookman Lee J. Harrer from his personal collection of books about books helped launch the Tampa Book Art Studio Library Collections in 2008. This year he helped us celebrate the holiday season by adding some 2,200 additional items to the collection with a gift appraised at more than $117,000.

Highlights of the new materials include important letterpress books from some of the major contemporary fine presses: Henry Morris’s Bird & Bull Press, John and Rosalind Randle’s Whittington Press, and Jan and Crispin Elsted’s Barbarian Press, to name a few. 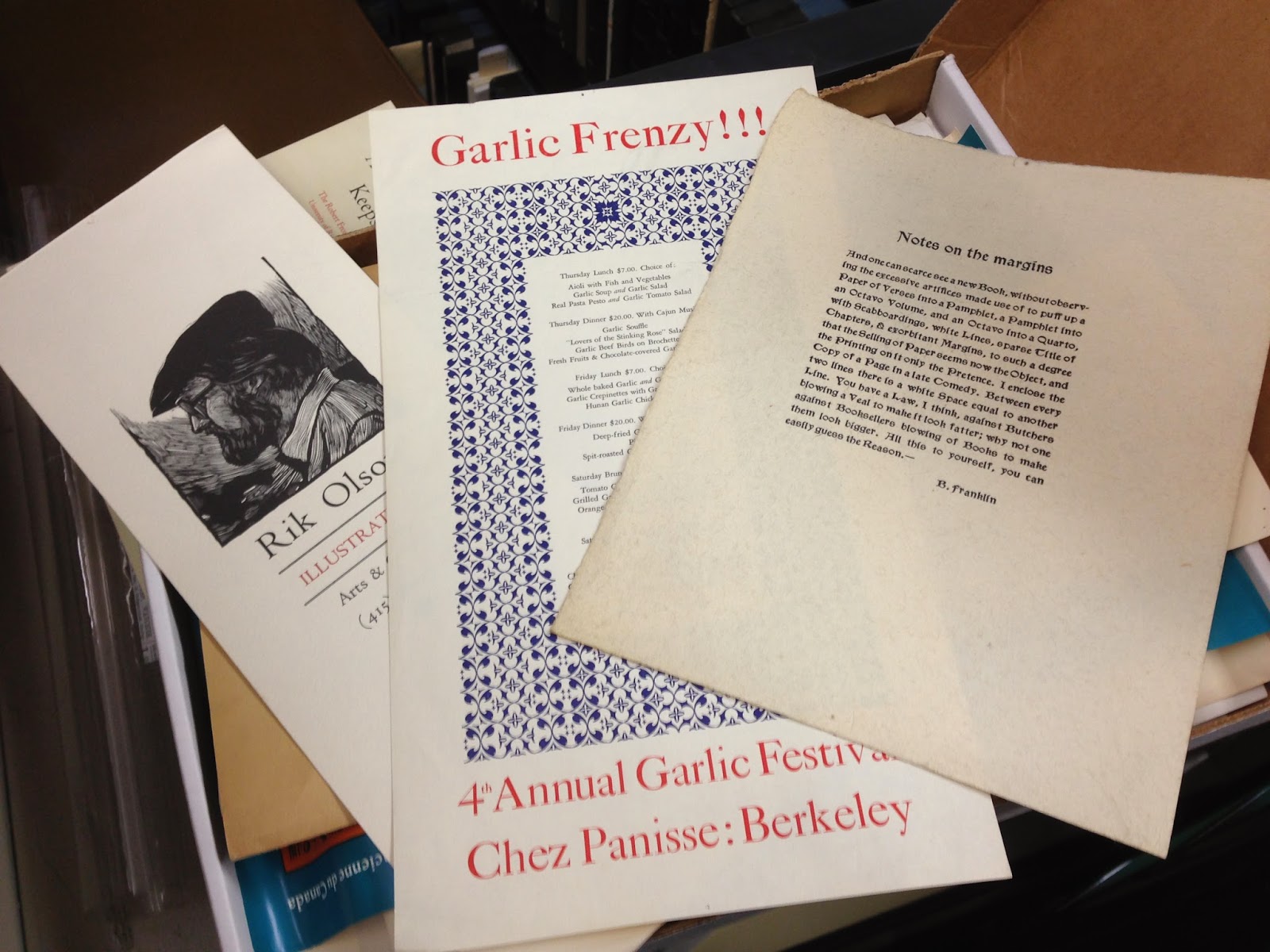 One component with special resonance for us is a fascinating body of items from the estate of Helen Lee, who was the Director of Type Sales for many years at the MacKenzie-Harris Type Foundry in San Francisco. Unique items include signed woodcut proofs from Barry Moser, letterpress ephemera of many kinds from private press printers, signed trials and proofs from private presses, and even some assorted correspondence. 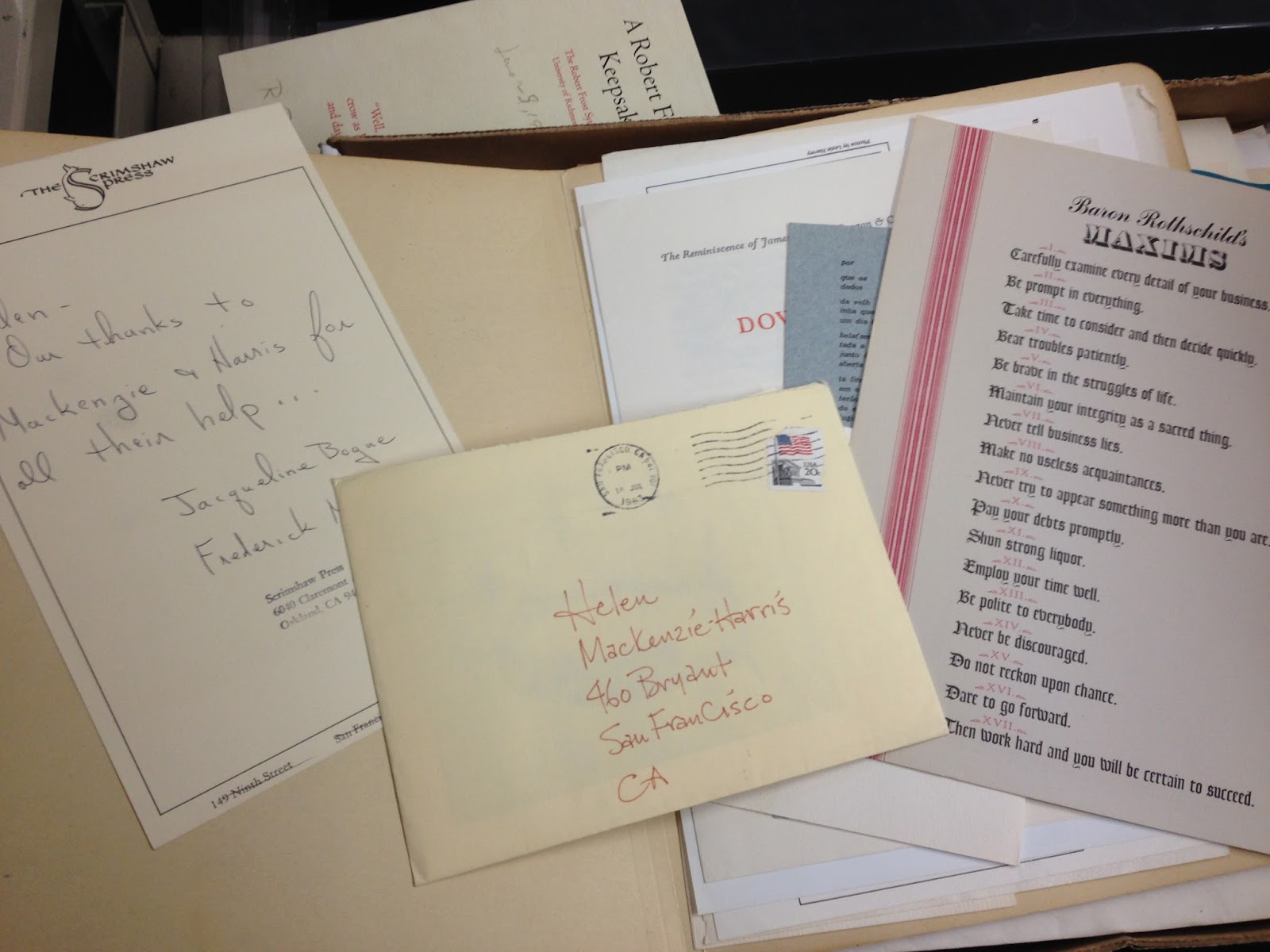 One of the most unique items in this group is a paper placemat inscribed and presented to Helen Lee for her birthday in 1982. It features an elaborate bird and heart pierced by an arrow, drawn by the artist Valenti Angelo (whose books are a feature of the TBAS collection), and signatures by Oscar Lewis, a leading member of the Book Club of California; Tommie Tommassini, President of the National Printer’s Association; and George Robert Kane, a noted bookseller. 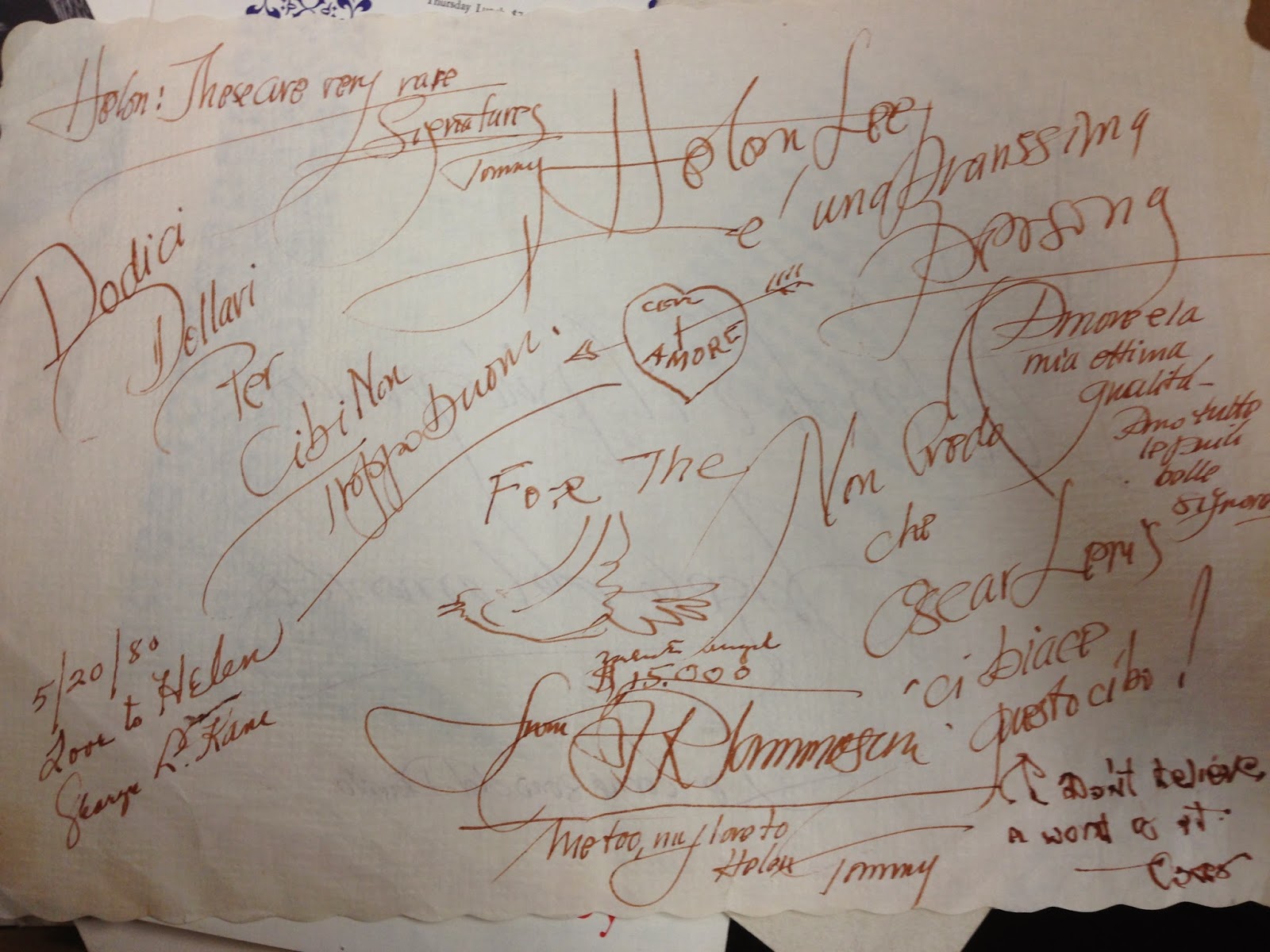 Already in our collection and complementing these new items from the Helen Lee estate is a vintage MacKenzie-Harris Type Foundry catalog donated by Calligrapher Ruth Pettis, who worked with Konglomerati Press for many years. The Konglomerati types and presses now form the heart of the Tampa Book Arts Studio, and some of the types were purchased from Helen at the M&H Foundry. 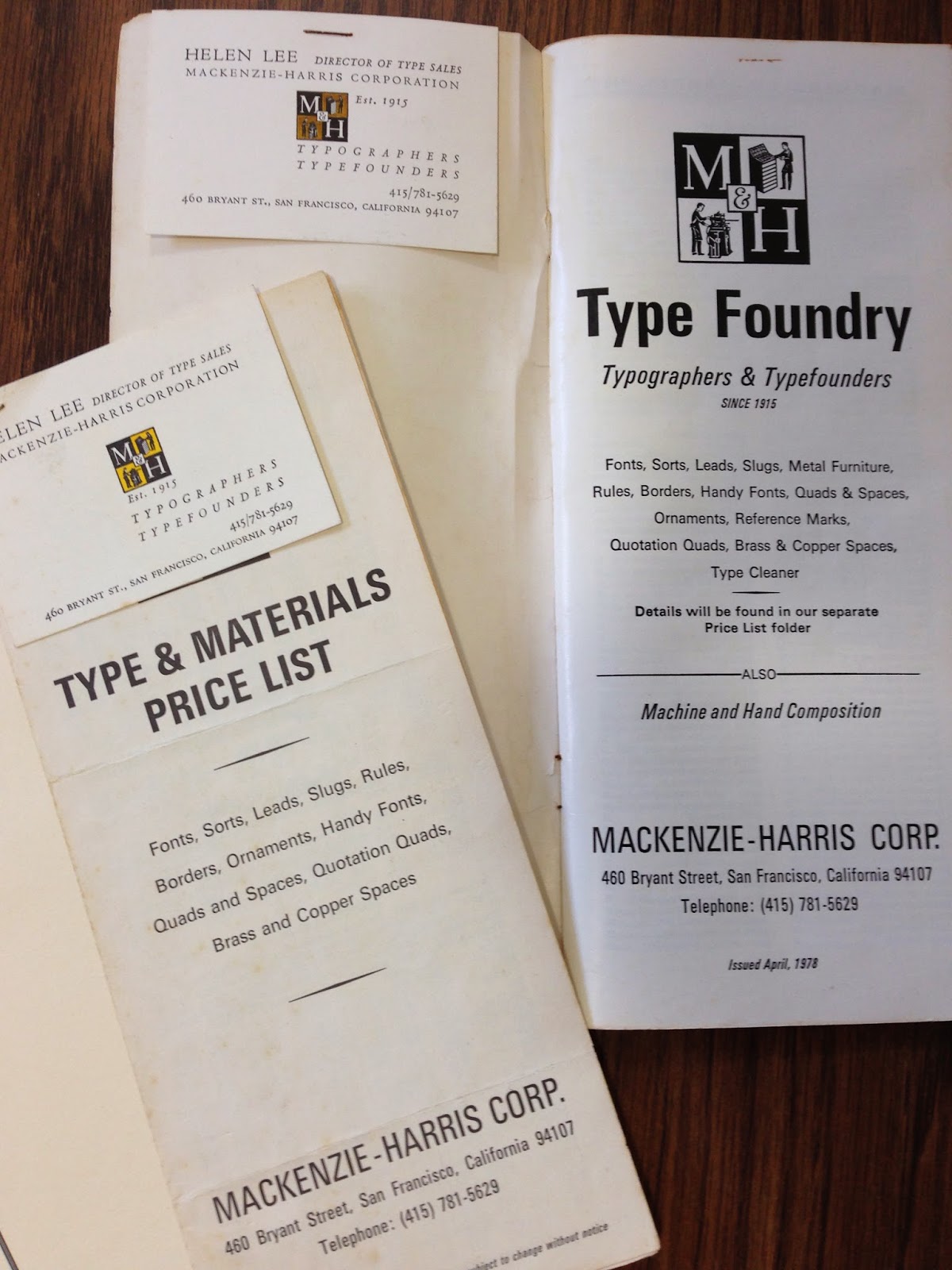 With the addition of this new gift, the Tampa Book Arts Studio Library Collection has grown to more than 7,700 items.  We will be featuring some of the highlights from Lee’s most recent donation on our blog throughout the coming year. Thanks to the generosity of Lee Harrer—and with the substantial additional gifts and collections from J. B. Dobkin, the Les Feller Family, and many generous individuals—the students in our Printing, Publishing, and Book Arts classes will have a chance to see examples of some of the finest printers in the world.

When these new gifts are combined with earlier donations, the value of the Lee J. Harrer Collection of Books about Books exceeds $426,000.  Lee is now at work on a third donation that includes his miniature books and related press ephemera, runs of book-related periodicals, and new limited-edition, fine press items such as the Barbarian Press magnum opus on type ornaments of the Curwen Press, Bordering on the Sublime.
Posted by Tampa Review & Tampa Press at 9:29 AM No comments: