Christmas in Midsummer for TBAS Library 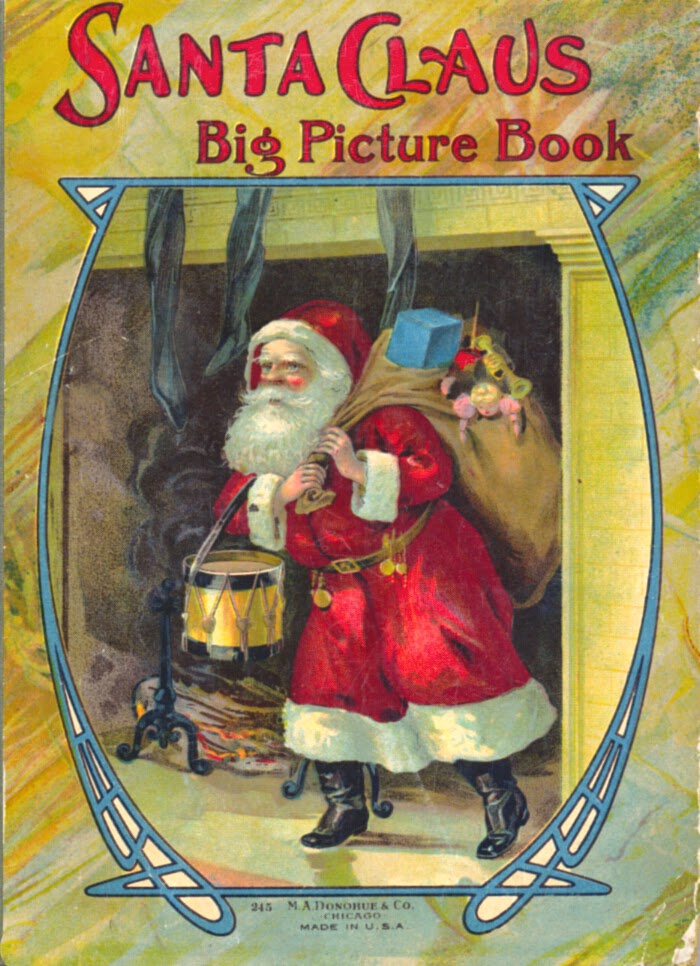 The Tampa Book Arts Studio Library Collections received an unexpected summertime visit from Santa Claus as donor Lee J. Harrer brought in some special vintage gifts that complement and showcase the antique printing blocks in our Les Feller Family Collections.  Lee is extending the Harrer Collection of Books about Books to include original editions published by Donohue & Co.  of Chicago that are printed from the antique blocks that were rescued and preserved by Les Feller, who discovered them in the vaults of the Chicago printer. They are now a treasured part of the TBAS Feller Family Collections. (See our post about a title, Jolly Jingles, discovered early on in the Collection.)

This color cover is from the Santa Claus Big Picture Book published by Donohue about one hundred years ago. The Feller Collection blocks include many sets of four-color separations, along with some engravings intended to be printed in a single color.  The Studio plans to produce limited-edition prints from the original blocks and will be making them available in portfolio sets as a fundraising activity.  Meantime, we look forward to being inspired by antique examples of the original printings, thanks to Lee’s book-collecting skills and generosity.

If you happen to have original children’s books from Donohue and Company that you would like to contribute to the library, please contact us at utpress@ut.edu.
Posted by Tampa Review & Tampa Press at 10:53 AM No comments:

THE TAMPA BOOK ARTS STUDIO WAS FILLED TO OVERFLOWING this Spring with twenty-three University of Tampa students enrolled in a course entitled “Printing, Publishing & Book Arts.” The course was taught by University of Tampa faculty members Richard Mathews, director of the studio and a professor of English and Writing, and Kendra Frorup, a sculptor and mixed media artist and a professor of Art, assisted by the TBAS Letterpress Coordinator Carl Mario Nudi and Studio Associate Joshua Steward. The class met every Monday, Wednesday, and Friday during the 14-week semester.

Students surveyed the history of printing and publishing from incunabula to contemporary artists’ books.  They studied type design and typography from historical and digital angles, and they explored hands-on aspects of letterpress printing. 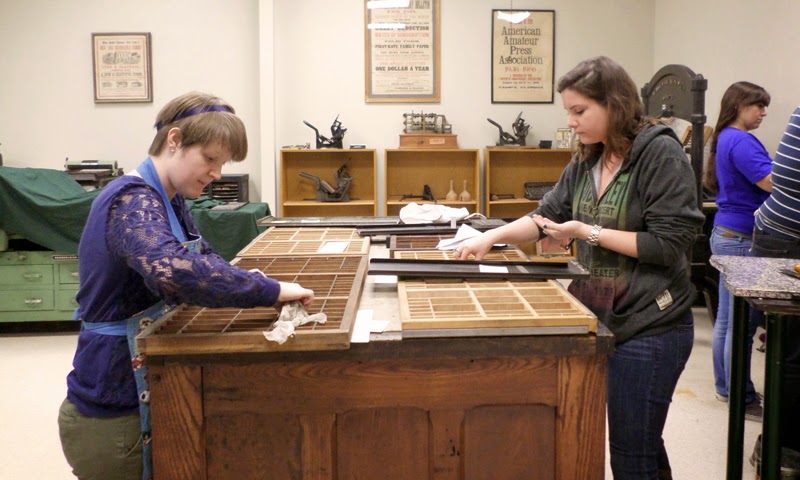 Nearly every available surface in the studio was utilized while students learned typesetting by hand from the California job case. As they became more familiar with the types available to them, they designed and printed limited edition postcards, larger broadsides with two or more colors, and they planned and completed a variety of individual projects. Most of the students also learned to set and cast lines of type on the Ludlow Typograph, which gave them an even broader selection of type styles and sizes than those found in the cases of vintage foundry types in the studio.

Frorup instructed students throughout the semester in the making of paper and showed them techniques for producing decorative paste papers and marbled papers. She also taught the students several binding techniques and worked individually with them to help them master different stitches and book forms. Everyone completed at least one binding exercise employing the pamphlet stitch and another using a stab binding.

They also gained experience and confidence in using the array of letterpress equipment in the studio, from composing sticks to galleys to furniture and quoins.  They all completed limited edition letterpress runs using our Vandercook presses—a Model 4 and Model 219AB. They took on the responsibility of printing the work they designed, which involved setting, proofing, and correcting their type, preparing and locking-up forms, and registering their sheets. 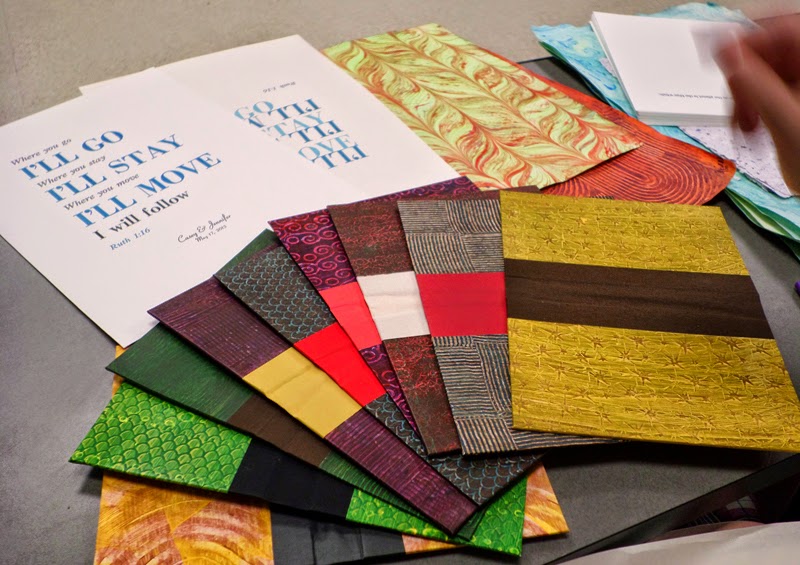 The last weeks of the course became a time for experimentation with different materials and with the traditional forms of printing. A few tackled split fountain (or “rainbow roll”) printing, others tried their hand at carving wood or linoleum blocks, monotype printing, collography, screen printing, hand-tinting, and even wood working. The students’ final projects were varied. Many included binding as well as printing, and some created chapbooks of poetry, stories, or essays. The course concluded with a session for the students to show and comment on the work they had done—and to collect all of the letterpress postcards into a die-cut and letterpress-printed portfolio packet designed to hold a complete class set (shown in slideshow below). 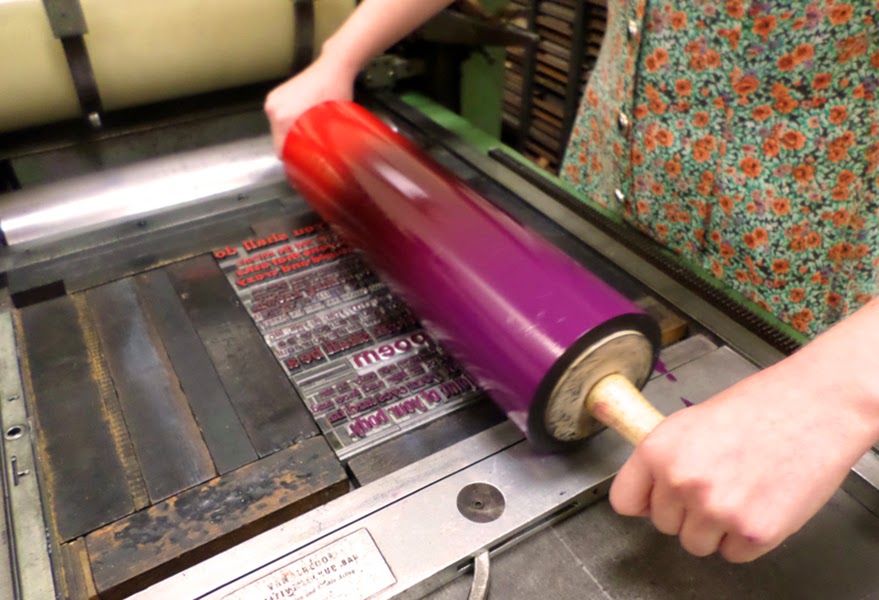 Click on photos within the slideshows to see larger versions

Special thanks to Jennifer Deg and Jack Whitaker for additional photographs
Posted by Tampa Review & Tampa Press at 4:29 PM 1 comment: 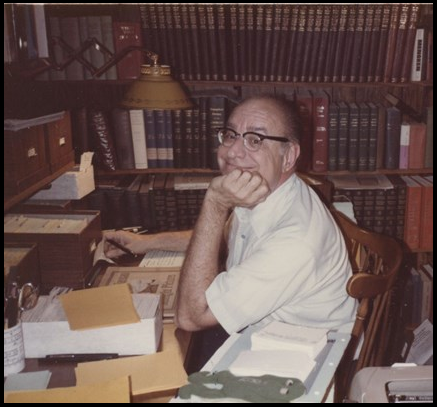 FAMILY, FRIENDS, AND ADMIRERS of Jim Servies are mourning his passing in Pensacola, Florida, on May 30, 2014, at the age of 88. He was a champion of books and print culture throughout his long life as a librarian, author, editor, printer, publisher, and bookseller. After graduating from the University of Chicago, he began his career as a librarian there, and then served in various positions at the University of Miami (Coral Gables), the College of William and Mary, and the University of West Florida.

During those years, Jim edited or wrote a number of books, including A Bibliography of John Marshall (1956), A Selected Bibliography of Virginia, 1607-1699 (1957), Earl Gregg Swem, A Bibliography (1960), The Poems of Charles Hansford (1961), and The Log of H.M.S. Mentor, 1780-1781 (1982). His work on these publications, and his experience as a reference librarian, prepared Jim to tackle a book that would be nearly two decades in the making: A Bibliography of Florida. First, Jim and his wife Lana spent four years cataloging more than 40,000 (yes, forty thousand!) books, articles, and other documents printed in or about the state of Florida. Then, after Jim retired in 1986, they began to work in earnest on their magnum opus. It would be published in four volumes between 1993 and 2002, totaling more than 2,000 pages and 18,052 entries. Michael Slicker of Lighthouse Books in St. Petersburg calls it “one of the (if not the) finest state bibliographies ever produced.”
Jim and Lana were active in the world of antiquarian books as proprietors of King and Queen Books, which has issued nearly 50 catalogs. They helped found the Florida Antiquarian Booksellers Association and its much-admired book fair, held annually in St. Petersburg.
The name King and Queen was also used for their press, which issued occasional hand-printed keepsakes, facsimiles and ephemera, many of which have a Christmas theme. The long list includes The Angels [by John Updike] (1968), An Ode to the King and Queen Press (1968), Christmas All Hail! (1969), The Office of Christmas (1974), Christmas Couplets (1975), Pensacola’s First Christmas Tree! (1978), Welcome Christmas (1979), A Christmas Tree Question (1980), A Christmas Shopping List: 1902 (1982), The New-Year Elephant (1983), A Florida Christmas, 1882 (1986), Holiday Recipes, A.D. 1594 (1988), Christmas Eve at Sea (1989), Little tree, little silent Christmas tree (1990), A Christmas Orange (1991), Florida: A Hundred Years Hence (1992), Christmas on Mt. Olympus (1993), The Eskimos’ Christmas (1997), Jennie’s Christmas, 1901 (1998), and Christmas in the Bag: A Major Jones Story (1999).
Jim’s friend and colleague Michael Slicker remembers him as “a man of tireless energy and a friend of the book who guided the University of West Florida Library through its early years, sent hand-printed keepsakes from time to time, supported the book fair in its early years, and was always willing to share his time and his knowledge. Moreover, he was a ‘gentle’ man in every sense of the word.  The world is a little darker today without the light of Jim's smile.”
Posted by Tampa Review & Tampa Press at 3:26 PM No comments: