In Memoriam: J. B. Lankes 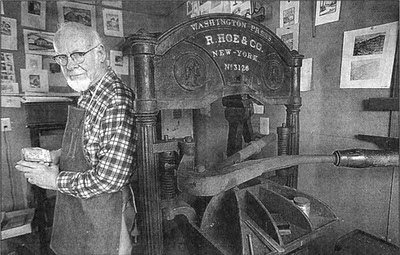 J.B. Lankes, a supporter and donor to the Tampa Book Arts Studio, passed away in Hampton, Virginia, on March 11, 2010, at the age of 94. Son of the woodcut artist J. J. Lankes, J.B. devoted great energy and talent toward the preservation and recognition of his father's artistic work.
Among his many contributions, J.B. facilitated the relocation of J. J. Lankes's 1848 Washington Press, on which his father had printed his woodcut illustrations for the books of Robert Frost, Sherwood Anderson, and other major literary figures, to the Tampa Book Arts Studio. (J.B. is shown in the photo above holding one his father's blocks at the press in his own studio, before the press was moved here to Tampa and restored.) J.B. actively encouraged our use of the press, supported our work on J.J. Lankes: His Woodcut Miniatures printed on it last year, and donated original prints made by his father and by himself from the original blocks, to the TBAS Library Collections.
J.B. was born in Buffalo, N.Y., on Aug. 30, 1915, to Julius John and Edee Bartlett Lankes. He attended Antioch College in Yellow Springs, Ohio, and graduated from the Bliss Electrical School in Takoma Park, Md., now Montgomery College, in 1938. After serving in the U.S. Army, 41st Infantry Division, during World War II, he became a professional engineer, retiring from Virginia Electric Power Company in 1975, after many years of service. Mr. Lankes was a member of the Tidewater Virginia chapter of Mensa, and he frequently wrote articles for its publication.
Memorial donations may be made to Peninsula Rescue Mission, 3700 Huntington Ave., Newport News, VA 23607.

Posted by Tampa Review & Tampa Press at 12:47 PM No comments: