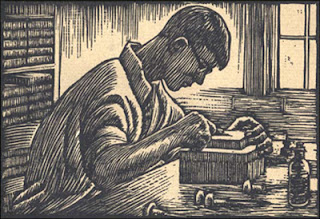 The Tampa Book Arts Studio has launched its first-ever Kickstarter campaign to assemble a project that brings an unpublished story of notable American woodcut artist J. J. Lankes into print in a fine, limited letterpress edition.  And after just ten days, the project is nearly halfway to its funding goal!

In 1950, nearing the end of his career as an illustrator and woodcut artist, Lankes wrote an allegorical fable that takes place in the lives of two mice, a story that emphasizes the snares of materialism versus the redeeming strength of love and forgiveness. Lankes also completed two illustrations to accompany it, but both the story and the cuts were set aside. They were never published or even publicly known, and they were nearly lost.  In fact, they have been lost—until now!

In 2006, more than fifty years later, the manuscript was discovered by Dr. Welford Taylor, Professor of English Emeritus at the University of Richmond and curator of the University Museums’ recent exhibition, “Julius J. Lankes: Survey of an American Artist.” Dr. Taylor has edited the Rich Mouse manuscript, written an introduction outlining its history and meaning, and proposed its publication to Dr. Richard Mathews, Director of the Tampa Book Arts Studio. As readers of our blog probably know, the TBAS is home to Lankes’s c. 1845 Hoe Washington hand press, No. 3126, on which he proofed and printed his blocks for Robert Frost and others. After his death his son gave the press to the University of Richmond, which placed it on extended loan at the Tampa Book Arts Studio.

This is only the latest Lankes-related project that we have undertaken using his artistic images and his Hoe Washington press. Previously, we have designed and printed a keepsake portrait for the Robert Frost Symposium, designed and produced a broadside including an engraving and quote by Lankes, and printed a hand-bound collection of Lankes’s miniature wood engravings. This time, using the press on which Lankes printed his woodcuts to illustrate books by Robert Frost, Sherwood Anderson, and others, we aim to bring a previously unpublished text by Lankes himself into print, together with his illustrations for his own work.

A third collaborator, Bob Oldham, a typographer, press historian, author of The Columbian Handpress At 200: An Historical Summary and World-wide Census, and proprietor of Ad Lib Press, who actually moved the Lankes press from Virginia to Tampa—suggested that the text of The Rich Mouse be set in a special casting of Frederic W. Goudy’s original “Village” private press typeface. 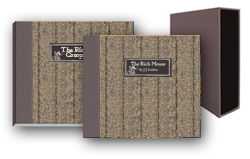 We agreed that is a great idea.  So, in celebration of the 150th anniversary of the great American type designer this year, we plan to print the book using a hand-set special casting of the original Village type, the face that Goudy designed for his own Village Press. At this point, we have only done preliminary design work, but in addition to printing it on Lankes’s own Washington hand press, we know that we will use a fine mouldmade or handmade all-cotton paper. The edition will be limited to 150 copies. It will be hand-bound in boards covered with special decorative papers we plan to adapt to echo the grain of weathered barn boards in the Lankes woodcuts. 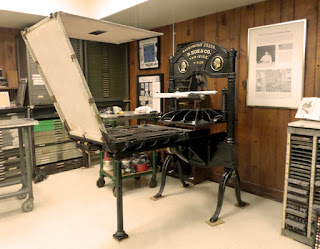 Read a more complete account of the project and see the list of special premiums available when you lend your support on Kickstarter.

And please share the news of this project with your friends and colleagues! While we have never before launched a Kickstarter campaign, we do understand that the secret for success is just having effective spread of the news through social media.  We hope you’ll pass the word along.