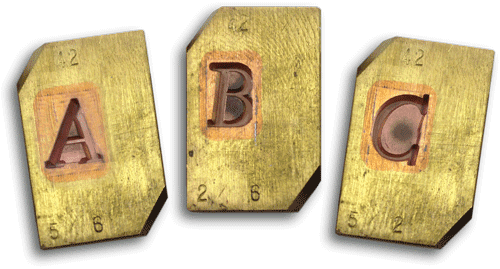 A rare and virtually unknown typeface designed by the acclaimed American type designer Frederic Goudy now has a new home here at the University of Tampa. Thanks to a David Delo Research grant and the generosity of the Lester Feller Family, the only known surviving mats for Goudy’s Companion Old Style type have become jewels in the crown of the Feller Family Collections at the Tampa Book Arts Studio.
* * *

Richard Mathews, Dana Professor of English and Writing at the University of Tampa, and Director of the TBAS, received a David Delo Research grant from the University of Tampa to acquire, document, cast, and write about Goudy’s little-known type, Companion Old Style.  As part of the grant he will give a talk on the history and discovery of the mats at the Tampa Book Arts Studio on January 31, 2015, where he will explain the background and design of the roman and italic fonts and demonstrate their casting on the Studio’s antique Monotype “Orphan Annie” caster. 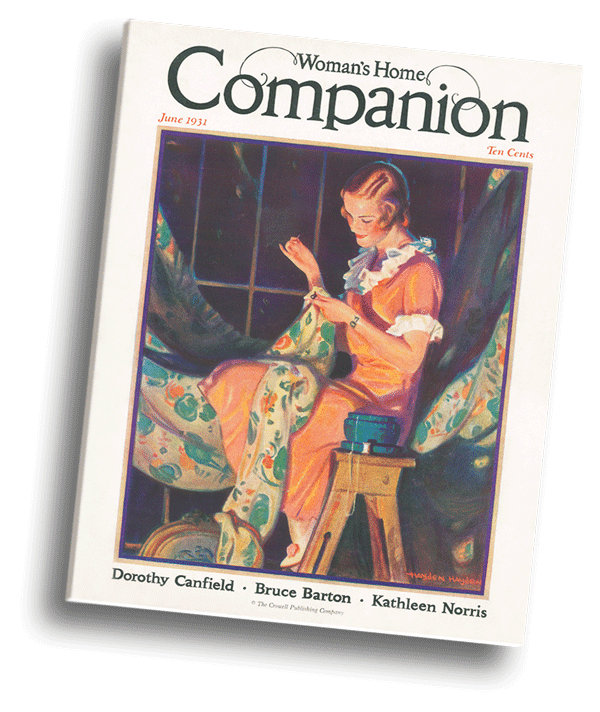 The brass Monotype matrices arrived in sixteen battered plastic cases, each containing a complete roman or italic alphabet. They are the masters for casting an exceedingly rare private typeface, never made commercially available. Commissioned in 1927 by Henry B. Quinan, Art Director for the Woman’s Home Companion magazine, the type was designed for exclusive use in the magazine, which had a national circulation of more than four million in the 1930s. Goudy worked on the project for several years, during which time he taught himself how to engrave the mats, developing his own tools for cutting the shape of each letter, number, and punctuation symbol into a flat brass matrix designed for use on the Monotype casting machine. The finished types first appeared in the The Woman’s Home Companion for June, 1931. In the end, not only did he make the patterns for each letter, but he also cut each of the mats himself. The mats today include 12-, 14-, 16-, 18-, 21-, 24-, 36-, and 42-point sizes in roman and italic.

How Companion Made Its Way to the TBAS 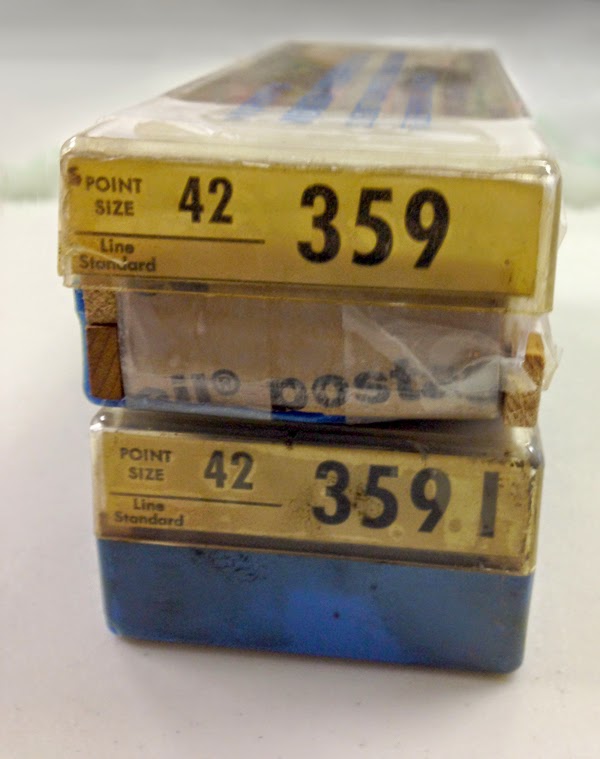 The mats were discovered and saved by Lester Feller in 1976 when the equipment of Monsen Typographers of Chicago was being liquidated. Feller, an amateur printer and type enthusiast who founded and operated the Twin Quills Press in Niles, Illinois, and later established the Printer’s Row Printing Museum in Chicago, collected antique types and cuts throughout the 1960s and 1970s for his serious letterpress hobby that he pursued from home base in a crowded garage. At the liquidation Les noticed the unidentified mats in custom Monsen Typographers plastic boxes with the Monotype number 359 identification, a number he was not familiar with, and he took a few mats out of the case to see if he could recognize the face. Though he couldn’t identify the type, he thought the slant of the letter “o” was interesting and he noticed that the old style numerals had a certain flair, and so decided to buy the mats without knowing what they were. 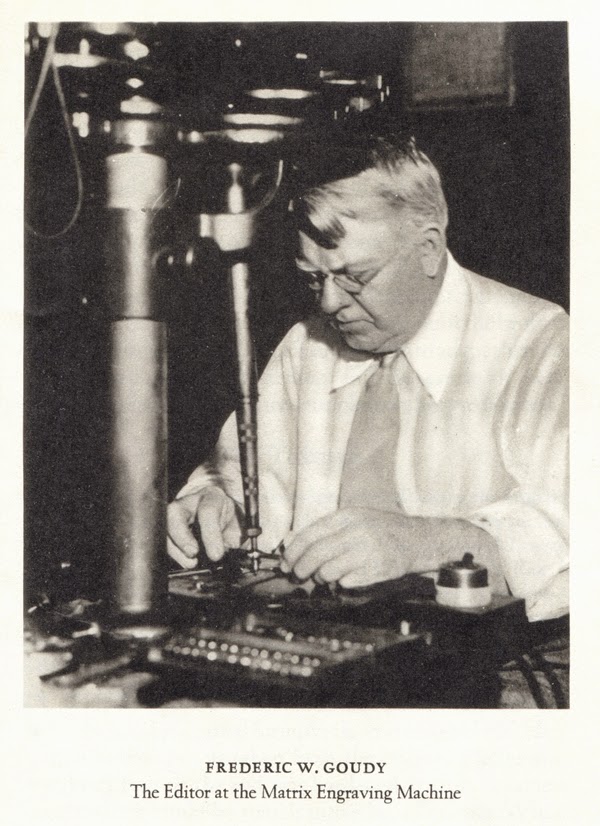 Les later showed a one-line printed setting of the word “Companion” to Rich Hopkins at a meeting of hobby printers, the Almagamated Printers Association Wayzgoose in Indiana in 1977, still not knowing what he had. Printers often saved scraps and type samples from job work that could show what a typeface looked like, and Les thought that “Companion” might be a word from a headline or ad to show the type. It certainly didn’t strike him as the name of a type, let alone being a type designed by Frederic Goudy. He had unsuccessfully looked through Monotype lists in various catalogs and specimen books, but he had not been able to find number 359. Hopkins was also intrigued, and turned to his own extensive references, including two different typeface encyclopedias, but the mats were not listed in any of the usual sources.  Rich remained on the chase, following various clues that eventually included that one-line sample word, and he was able to identify the mats as Companion Old Style, an exclusive, private type commissioned by the art director of the Woman’s Home Companion, and used exclusively by the magazine.

In 1979 Rich Hopkins wrote the whole story of the discovery and identification of the type in a beautifully printed issue of his Typographic Curiosities, set in Companion types cast from the mats that Feller had loaned especially for the booklet. Dr. Richard Mathews, who was directing the Konglomerati Florida Foundation for Literature and Book Arts at that time, knew Rich through the American Typecasting Fellowship and soon heard about the Companion discovery. He contacted Les and was able to arrange to have enough of the type cast to complete the first book ever issued in the private typeface: a collection of poetry by Ohio poet Hale Chatfield entitled Water Colors. Published in 1979, it was typeset by hand in Companion, letterpress printed, and hand bound at Konglomerati Press, with partial funding by a grant from the National Endowment for the Arts. Feller and Mathews had lost touch over the years since then, but as the Tampa Book Arts Studio was first taking shape a decade ago, they made contact again. Les and his wife, Elaine, were spending winters in Florida, and they arranged to stop at the University of Tampa to see the new setup.  Presses, type, and typecasting equipment from Konglomerati had been supplemented by donations from others, and the growing collection reminded Les of what they had hoped to do with the Printer’s Row Printing Museum: inform and inspire others with an appreciation of the history and the desire to keep the equipment in use.
Future Legacy of Companion at the Tampa Book Arts Studio

Les and Elaine established the Feller Family Collections as part of the special collections library of the Tampa Book Arts Studio. They have contributed hundreds of original antique printer’s blocks from the early twentieth century children’s books published by the Donohue Company of Chicago, antique letterpress models, displays of wood-engraving processes, hundreds of printed books and pamphlets on letterpress printing, and a collection of antique letterpress posters and broadsides from the seventeenth through the nineteenth century. Many of these are framed, and now hang permanently in the TBAS.
* * *

Today the Companion Old Style types will form a unique living legacy as the highlight of the Feller Family Collections, offering a very special opportunity for students to handle a private typeface found nowhere else in the world. Faculty and students together will explore new ways of utilizing this distinctive and nearly lost typeface by America’s best-known and most prolific type designer.  Here it will be cast sparingly and used for special projects. Most importantly it will offer students a hands-on experience with history. In the process, they will also contribute to history and scholarship themselves as they find ways to feature and reveal the possibilities for expression that this virtually unknown typeface holds.

Frederic Goudy wrote of Companion in his book A Half Century of Type Design and Typography:
“Companion Old Style and its italics show greater consistent
original features than any other face I have ever made.”

The Tampa Book Arts Studio is thrilled to be the permanent home for this extraordinary type.
Posted by Tampa Review & Tampa Press at 5:55 PM No comments: