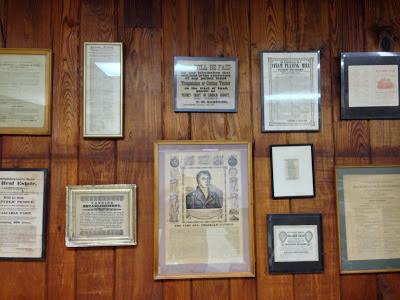 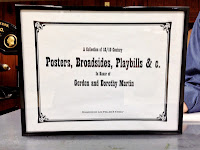 The newest donations from Les Feller & family have officially been displayed and integrated into the Tampa Book Arts Studio, located in the Edison Building on the University of Tampa campus. The framed 18th & 19th century posters, broadsides, and playbills were hung in honor of Gordon and Dorthy Martin.

Of special note is an educational display about “The Wood Engraver's Art,” assembled and mounted by Les to showcase the achievements and techniques of this art form.  A second panel includes a representative selection of engraver’s tools and instruments. 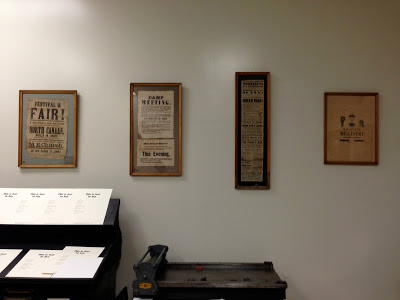 Posted by Tampa Review & Tampa Press at 5:00 PM No comments:

"The Beauty in the Best Barns . . ." Limited-Edition Letterpress Broadside Now On Sale 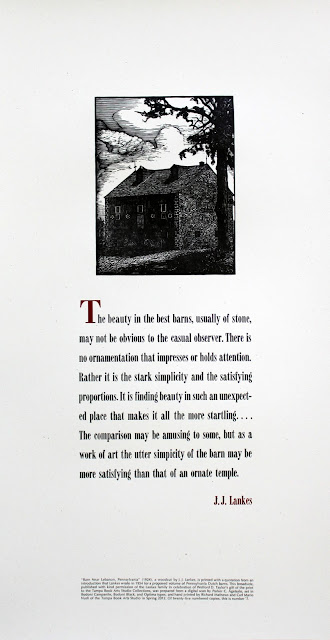 The American artist J. J. Lankes is best known for his woodcut illustrations and bookplates for poet Robert Frost. This limited-edition letterpress broadside celebrates the gift of an original  J. J. Lankes print to the Book Arts Studio special collections. The Pennsylvania barn woodcut is reproduced together with a quotation by the artist: "The beauty in the best barns, usually of stone, may not be obvious to the casual observer. There is no ornamentation that impresses or holds attention. Rather it is the stark simplicity and the satisfying proportions. It is finding beauty in such an unexpected place that makes it all the more startling. . . . The comparison may be amusing to some, but as a work of art the utter simplicity of the barn may be more satisfying than that of an ornate temple."  The text has been handset and cast in the Studio in Bodoni Campanile, Bodoni Black, and Optima types and printed letterpress in two colors by Carl Mario Nudi and Richard Mathews in an edition of 25 numbered copies, only 20 of which are for sale. Proceeds benefit the Book Arts Studio. $50.
Posted by Tampa Review & Tampa Press at 3:35 PM No comments:


Posted by Tampa Review & Tampa Press at 5:09 PM No comments:

There was a buzz of excitement this week as the Feller Family Collections arrived by truck from Illinois and we began to unload the three large pallets that include antique patent models of presses, books and manuals about printing and typography, examples of early letterpress newspapers and printed pages, framed posters and artifacts, and original artwork and printing blocks from Donohue Company children's books at the turn of the twentieth century.

Letterpress Coordinator Carl Mario Nudi and donor Les Feller had done a professional packing job at the Feller home in Niles, Illinois. The whole shipment arrived in great shape. Their custom-made boxes and ample foam “peanuts” even protected the fragile glass case around the working patent model of a gravure rotary press, which arrived without a scratch or crack. 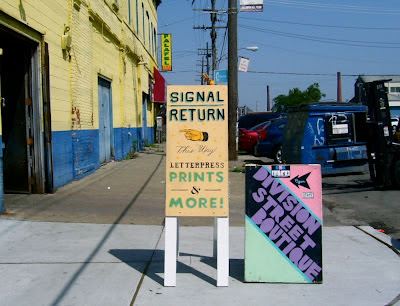 Detroit is probably best known for making great American cars.  But it also was a center of great letterpress work in the past. Today it's also contributing in innovative ways to the revival of interest in letterpress printing crafts.

Ryan Schirmang, director of the storefront operation in Detroit’s Eastern Market district, enthusiastically greeted Carl and his sister, Patricia, who joined Carl on his adventure.

Ryan helped launch Signal-Return as a project manager for Team Detroit, the international advertising and marketing firm. Team Detroit established the print studio as a way to bring traditional and modern techniques of printing to the community, and to provide a workspace for artists and designers to produce unique prints for retail clients.

The smell of ink and type dust was in the air as you entered the studio, Carl noted.


“Samples of the posters and broadsheets hung from clothes lines in a smart display of the work these young people were producing,” he said. “It was exciting to see letterpress being used as a means to bring people to the inner city.”


The studio’s name, Signal-Return, plays on the maritime history of the Motor City. Besides the auto industry, shipping on the Great Lakes is one of the big economic engines of Detroit.

Letterpress printer and designer Lester Feller founded the Printer's Row Printing Museum in Chicago in 1980. When it closed in the early 1990s some of the treasures that once formed part of the museum's displays were saved in storage at the home of Les and his wife, Elaine, in Niles, Illinois, a northern suburb of the Windy City.

Now, thanks to the generosity of Les and Elaine these pieces of letterpress history will soon take on new life as they enrich the Tampa Book Arts Studio.


During the second weekend of July, which followed a week of record-breaking triple-digit temperatures for Chicago, TBAS Letterpress Coordinator Carl Mario Nudi brought his experience of working in Florida summer heat to the task as he rolled up his sleeves and with the help of donors Les and Elaine, packed up the remarkable donation of printing books, plates, presses, and artifacts.

Guest Writer Arthur Flowers, who was on campus this week for the second residency of the University of Tampa MFA in Creative Writing, joined graduate students in the Book Arts Studio to print letterpress copies of a keepsake. The graphic was printed in yellow on the 1848 vintage Hoe Washington hand press on which J. J. Lankes printed his woodcut illustrations for the poems of Robert Frost. The type was cast on our Ludlow and printed on the hand-turned Vandercook 4.

Below is a reading from novelist and literary bluesman Arthur Flowers as he performs in Sykes Chapel on the University of Tampa campus during the June 2012 MFA residency.


Posted by Tampa Review & Tampa Press at 4:10 PM No comments:

With Great Thanks To Leland Hawes 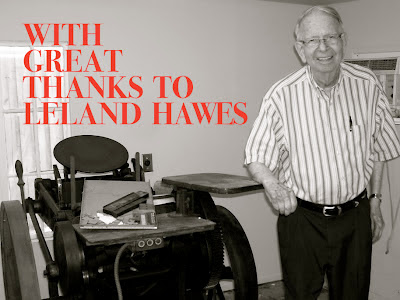 The Tampa Books Arts studio would like to thank retired Tampa Tribune columnist and longtime hobby printer Leland Hawes for his recent donation of his collection of letterpress equipment.

Leland has been editing and printing seriously since he joined the Florida Boy Editors in 1940, when he was twelve years old.  He produced the "Flint Lake Diver" on a mimeograph about twice a month for the next two years, selling subscriptions to neighbors and relatives in Thonotasassa for five cents a month. In 1942 he joined the American Amateur Press Association (AAPA), a national group of printing enthusiasts who publish and circulate journals among themselves. That year Leland also founded his own journal, "The Gator Growl," and it recently passed the 150-issue milestone.

He took the plunge into letterpress printing in the early 1960s with a Sigwalt tabletop press, and in 1966, when he heard that Gene Hancock had a Chandler and Price press for sale, he bought it.  He remembers the day that Gene moved it into his garage using a combination of pry bars and pipes.

Though Leland sometimes referred to the press as “that monster in my garage," he seemed to have tamed it. Two young local printing enthusiasts, Dave Tribby and Jerry Thomas, gave him tips and coached him on how to operate the press. He used it to print “Only On Sunday,” the journal of the Suncoast Amateur Press Society (or “SAPS”). Local members included Fred Liddle, Jack Bond, Picot Floyd, and Frank Spear. Friends from other parts of Florida, like Sheldon and Helen Wesson and J. Ed Newman, would attend meetings when they could.

The Winners of the First Annual TBAS Letterpress Excellence Awards have been announced! 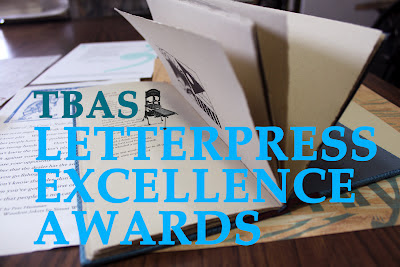 Last year letterpress printers and book artists were invited to submit work published during the 2009 and 2010 calendar years, to the First Annual TBAS Letterpress Excellence Awards. Private presses, independent publishers, and individual artists as well as trade and university presses were eligible to enter the competition in five general categories: hardback book, paperback book, artist's book, broadside, and ephemera. To be eligible, all entries had to be printed via letterpress and completed during the designated calendar years. Awards were selected on the basis of design, typography, materials, craftsmanship, creativity, and overall achievement by the associates of the Tampa Book Arts Studio.

The winning entries will be featured in an exhibit opening at the University of Tampa in February and will be available for tour to libraries, book arts studios, and other venues for one year following the award.

These awards recognize excellence and achievement in contemporary letterpress printing and design:

Abigail Rorer stops by the TBAS

Abigail Rorer stopped by the TBAS on Monday, February 6, on her way to Venice to see family. She escaped freezing temperatures at her home in Northampton, Mass., and came to Florida just in time for the start of what seemed like an early summer! After touring the 1891 hotel building at the heart of the UT campus, she browsed through the special collections and wound up her visit at the printing studio. Abigail talked about her work as a wood engraver with TBAS associates Richard Mathews, Sean Donnelly, Kendra Frorup, and Mike Massaro. Among other secrets of her craft, she praised the qualities of Corian as a substitute for traditional boxwood.

Since 1989 Abigail has been proprietor of The Lone Oak Press. Under that imprint she has published many fine press books and broadsides. She has also done work on commission for small presses and trade publishers, like HarperCollins, The Folio Society, Norton, Houghton Mifflin, David R. Godine, and various university presses. Her work is included in the permanent collections of the Huntington Library, the Metropolitan Museum of Art, the Library of Congress, and many others. Her recent work includes "Christmas Trees" by Robert Frost (in collaboration with Pat Alger) and "On the Hunt for the King of the Alps: A Plant Deemed Worthy" by Reginald Farrer.

Posted by Tampa Review & Tampa Press at 10:35 AM No comments:

It was a sticky summer day not that long ago when the necessity of moving the Tampa Book Arts Studio became apparent. The nuances of the move had seemed daunting when laid out on blueprint paper and tiny measuring-tape-markings blocked out on an empty stone floor. And for weeks, as this move progressed, it was the slog of many to endure – and many to whom we are all grateful. Though now on a grey Florida winter afternoon and after at least a hundred-tons of precise pushes, pulls, and slight nudges – it is safe to say that the new Tampa Books Arts Studio has been reborn at 214 North Boulevard, Tampa, Florida.

Tested already during an inaugural MFA event, the new studio surpassed expectations as it handled a class load of over 30 creative writing students, all drawn for a taste of the mechanical lore of the letterpress crafts. The goal of the visit was to create an original keepsake for each student, which featured a fitting quote from a guest-MFA author, Francine Prose. The production process tied together several kinds of printing and techniques. For example, the deep green palms as seen below were printed on an 1848 Hoe Washington hand press that once belonged to J.J.Lankes (Lankes is the noted American woodcut artist who illustrated books by Robert Frost and other literary figures). The large type was hand-set and cast on a Ludlow Typograph and printed in black ink on a hand-turned Vandercook 4 press. The small type was handset in Kennerley Italic,  cast as individual letters on our Monotype sorts caster.

To describe the event, it would be right to say simply that it was as it should have been: An event filled with fellowship and promise. New writers. Old writers. Old machines. Fresh ink.