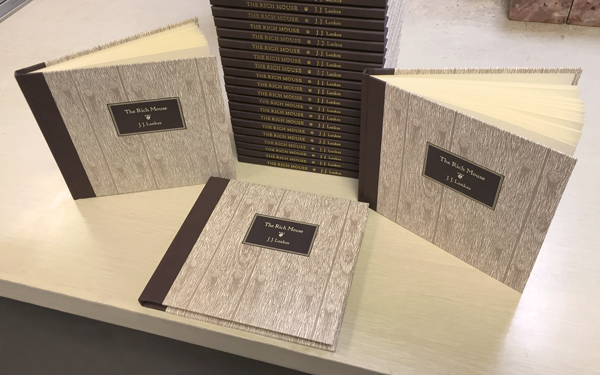 Today is the 56th anniversary of the death of the American woodcut artist Julius J. Lankes and it marks the official publication date for our letterpress first edition of his previously unpublished story, “The Rich Mouse.” Since completing the printing of the text last year, we have been working on a companion volume, “The Rich Mouse Compendium,” which includes essays, photographs, and even reproductions of the author’s original draft manuscripts.

The special letterpress edition also celebrates another milestone American artistic achievement. It is handset in a special foundry casting of Frederic W. Goudy’s original Village type, and the fact that it was typeset and printed during the year marking the 150th anniversary of Goudy’s birth made it even better.

Today, coinciding with the official “Rich Mouse” unveiling, P22 Type Foundry is releasing the first digital version of Village type, designed by Paul Hunt. This is the same Open Type font we used to produce the “Rich Mouse Compendium” volume, which is the first book publication for this unique type in digitized form. P22 are celebrating an anniversary of their own today—their 22nd Anniversary of offering unique digital types—and are offering the digital Village font for 50% off this month, with an additional 22% discount on April 22. Be sure to visit the P22 website for a full showing.


Over the next month we will be gathering, collating, and carefully packing the completed pieces of our special edition. It will be mailed first to the supporters who made the project possible by being a part of the original Kickstarter campaign.


Copies of the letterpress edition are still available, but the edition is limited to only 150 copies!
You can reserve a copy for yourself here!