The phrase “good things come in small packages” may bring to mind a diamond ring in a blue Tiffany gift box, but it can be applied to the world of books as well, in the shape of miniature books. To be considered miniature, a book must be no more than three inches in height, width, or thickness. The origin of these small wonders can be traced to the earliest days of writing. As long as 4,000 years ago, scribes and scholars made miniature clay tablets, scrolls, and manuscripts. Soon after the invention of printing in the fifteenth century, miniature books became regular productions of presses throughout Europe. It is estimated that about 200 miniatures were produced in the 1500s – including forty-six Bibles and editions of Dante and Ovid. Until the late 1800s, miniatures were often on religious subjects or made for children. Then, grown-up bibliophiles began to discover their charms, and clamored for miniatures of their own. Now, Conclaves are held annually by the most devoted collectors; fine printers specialize in making them; and miniatures are eagerly sought by private and institutional collectors. One of the largest collections is at the Lilly Library at Indiana University, where they have 16,000 miniatures. The Tampa Book Arts Studio is still working on its first 1,000, but we are delighted by those donated by our generous patrons, Lee Harrer and J. B. Dobkin.

Lee recently hand-delivered dozens of miniatures to our office, housed in a custom bookcase. As we cataloged them, two stood out: The Gift of the Magi by O. Henry (1978) and Frontier Tales of the White Mustang by J. Frank Dobie (1979). Though they share the same imprint—Somesuch Press—they were produced by different printers – Andrew Hoyem and David

Holman, who signed and numbered their books. They are both of high quality, but are also distinguished from one another by typography, paper, and binding. This brought to mind the approach taken by the Limited Editions Club, established in 1929 by George Macy, who hired a different team of typographers, printers, binders, and illustrators to produce each of his books. And so we wondered who was behind the Somesuch imprint. The fact that the press was located in Dallas gave us a clue. A little research revealed that Stanley Marcus, of Neiman-Marcus fame, and his wife Billie were behind these handsome books. Stanley was a famous bibliophile with a deep interest in miniatures. It was his wife’s idea to have a miniature edition made of Stanley’s memoir, Minding the Store. That led to the creation of the Somesuch imprint and nearly two dozen handsome books. We hope the two that we own will have company on the shelves before long. 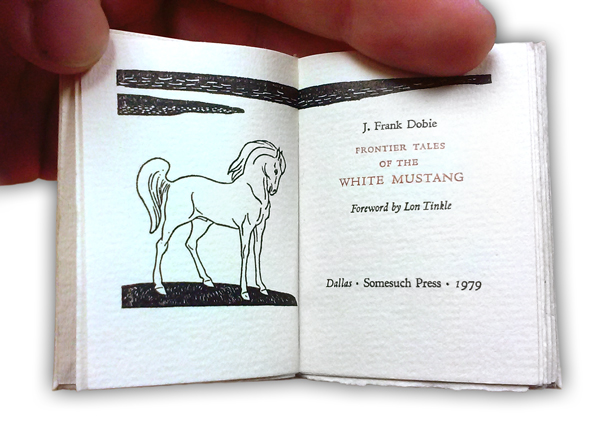 The title page of “Frontier Tales of the Wild Mustang”

Jay has been pursuing the books of Achille St. Onge for some time. He has now assembled a substantial run of St. Onge’s handsomely made books. Lee had several in his collection as well, and by luck they didn’t duplicate what Jay had bought. We now have nearly half of the forty-six miniatures published by St. Onge between 1935 and 1977. Though he began with Noel, Christmas Echoes Down the Ages and closed his career with Addresses of Her Majesty Queen Elizabeth II, the majority of his books are very American in flavor – Presidential inaugural addresses, works by or about Abraham Lincoln, Henry David Thoreau, and Paul Revere, and others on the Mayflower, St. Augustine, Florida, and the Declaration of Independence. Beyond the excellent choice of subjects for his books, St. Onge paid special attention to the quality of the books and their design. Some early titles were printed for him by D. B. Updike’s Merrymount Press and The Chiswick Press (the latter with bindings by Sangorski and Sutcliffe). By 1959, though, the venerable firm of Joh. Enchede en Zonen, in Haarlem, Holland, had become St. Onge’s printer of choice, and they produced a long series of uniformly handsome leather-bound editions for him. 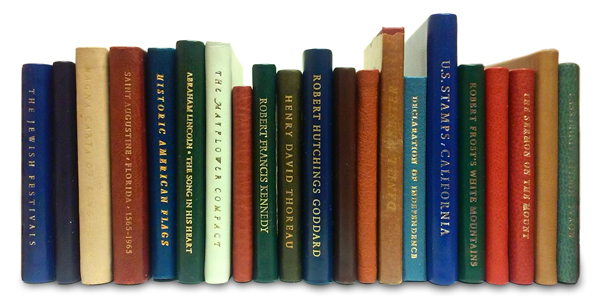