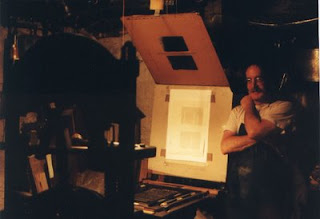 The Tampa Book Arts Studio will open its doors to visitors from 2-4 pm Saturday, August 1, 2009. Those who stop by can see guest hand press printer Steve Heaver of Baltimore at work with TBAS staff and volunteers to print the studio’s first limited-edition miniature book.

Heaver (shown in this Terry Chouinard photo doing late-night printing on his Reliance Press) is widely respected as a “printer’s printer” whose meticulous presswork is legendary and whose knowledge of the traditional iron hand press is both broad and deep. His fine press editions from his own Hill Press are sought-after collector's items, and he is a past Chairman of the Fine Press Book Association (North America). In consultation with the Hostmann Steinberg ink company he developed “Hostmann Steinberg Special Oil Based Letterpress Ink,” considered by many to be the finest ink available for letterpress work.

The ambitious project underway at TBAS is LANKES: His Woodcut Miniatures. This miniature edition will be the first-time gathering of twelve miniature woodcuts by the American artist J. J. Lankes (1884-1960), best known for his woodcut illustrations for books by Robert Frost and Sherwood Anderson, and it is being printed on Lankes’s own 1848 Hoe Washington Press that he used in his studio to print his famous blocks.

The book includes an essay on the Lankes miniatures by Welford D. Taylor and short commentary on each cut by Parker C. Agelasto, both of them noted Lankes collectors and scholars.

Not only will the book be printed on a Lankes press, but also will be bound with Japanese papers originally purchased by J. J. Lankes for his own projected use in presenting his miniature cuts, though the project remained uncompleted at his death. This printing will be limited to 200 numbered copies for sale in boards covered with the Lankes Japanese paper in a hand binding by David Barry of Griffin Bindery. An additional 75 copies will be available in a deluxe edition leather binding, with Lankes Japanese endsheets, each copy signed by the editors. All proceeds will support the nonprofit Tampa Book Arts Studio at the University of Tampa.

Printer Steve Heaver will explain the traditional process of hand printing and answer printing questions from visitors during the session on August 1. He will be joined by Lankes expert Parker Agelasto, a historian of American printmaking who has served as Curatorial Assistant of prints and photographs at the Smithsonian American Art Museum and co-editor of the Washington Print Club Quarterly. Agelasto is currently compiling the catalogue raisonné of prints by J. J. Lankes and will answer any Lankes-related questions.

Space is limited. Please RSVP at your earliest convenience to allow us to save a place for you:

Be sure to give us your contact information. We’ll reply to confirm your spot and to send directions to the studio.
Posted by Tampa Review & Tampa Press at 10:04 AM No comments: