A Celebration of Companion Old Style 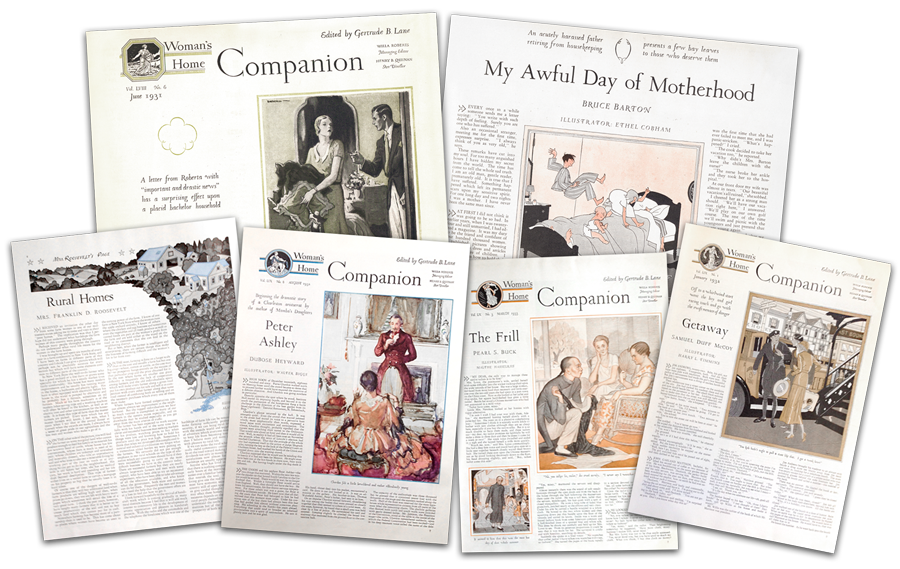 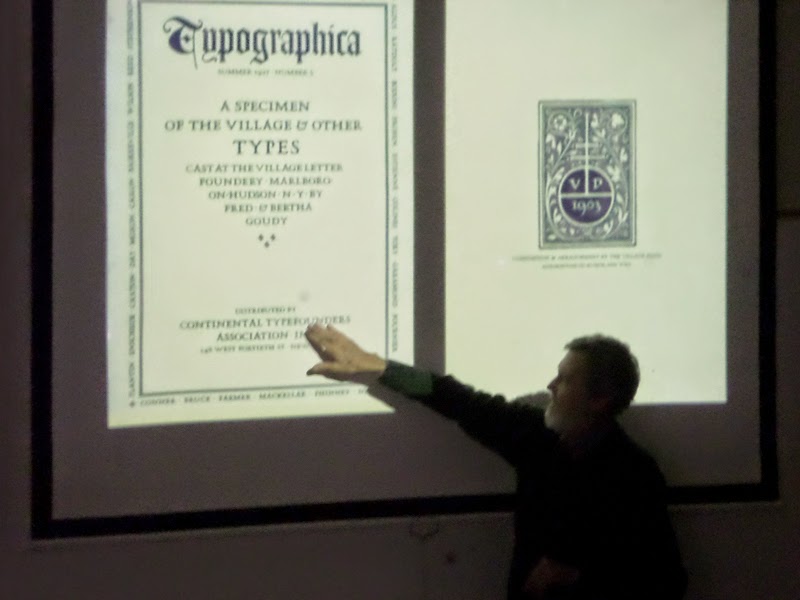 The Tampa Book Arts Studio completed January 2015 by beginning its year-long celebration of the 150th anniversary of the birth of the great American type-designer and printer Frederic Goudy—a party capped-off by casting type from the only surviving matrices for his unique Companion Old Style types. The event centered around a talk given by Richard Mathews, Director of the TBAS, who described the impetus for the creation of the face, its design, and the history of the use of the typeface. Mathews, drawing from a large volume of research, including materials from our own Tampa Book Arts Studio Library Collections, began by discussing Goudy’s early life and his development as a type designer, moving into a discussion of Goudy’s first types and into the commission Goudy accepted in 1927 to create a new typeface for the Woman's Home Companion magazine. Mathews pointed out unique elements of the typeface itself and discussed the face in context with Goudy’s other types and ornament designs. The talk ended with the story of how amateur printer and type enthusiast Les Feller discovered the Companion Monotype matrices during the liquidation of Monsen Typographers in Chicago, and how the Companion matrices found their home at the TBAS.

As part of the event, two films were played on a loop that could be viewed whenever convenient by those who attended.  The first was a 2014 video interview with Les Feller, describing his discovery and rescue of the Companion matrices (click on video at right to play). Paired with it was The Design to The Print by Frederic W. Goudy, a silent film from the 1930s that enables the viewer to look over the shoulder of Goudy as he shows his process for creating a new type, from first drawings, to engraving the matrices, to casting the type. 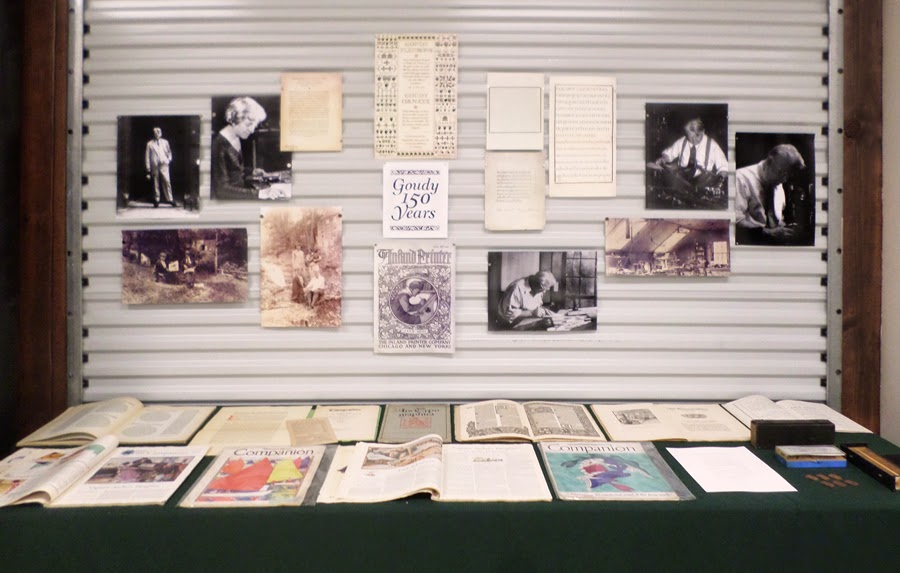 Following the talk, the crowd moved from the classroom into the Studio where there were opportunities to ask questions of the associates, learn more about Goudy, and to see a demonstration of typecasting from the original mats on a Monotype Sorts Caster, which produces individual pieces of type just as Goudy did in his foundry. Designs by Goudy, enlarged photographs of Fred and Bertha Goudy, and enlarged, signed proofs were displayed, together with items from the TBAS collections, including original copies of Goudy’s type publication Ars Typographica, original copies of Woman's Home Companion, and the first book to be set entirely in Companion, Water Colors, published in 1979 by Konglomerati Press. Notable items of the display were a grouping of facsimiles of Goudy’s first, dated proofs of three sizes of Companion (courtesy of the Cary Collection at RIT), photographs of Goudy's home and studio at Deepdene, and a printed sample of Companion known to be hand-set by Bertha, overlaid over a photo of her setting type in a composing stick. 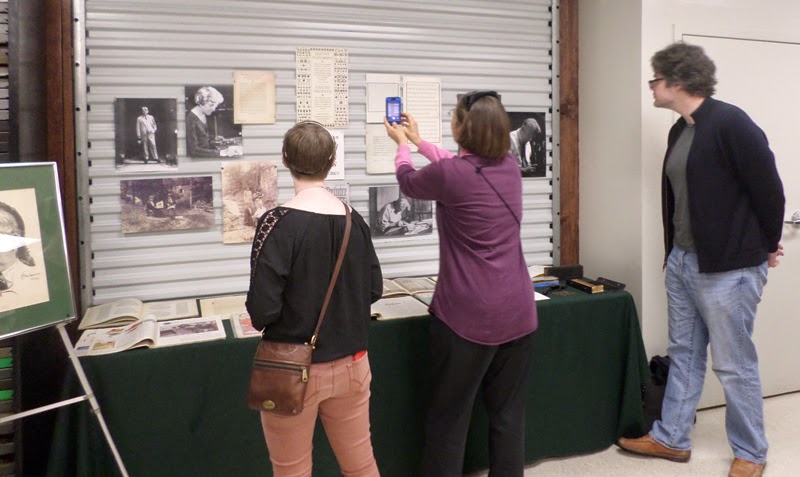 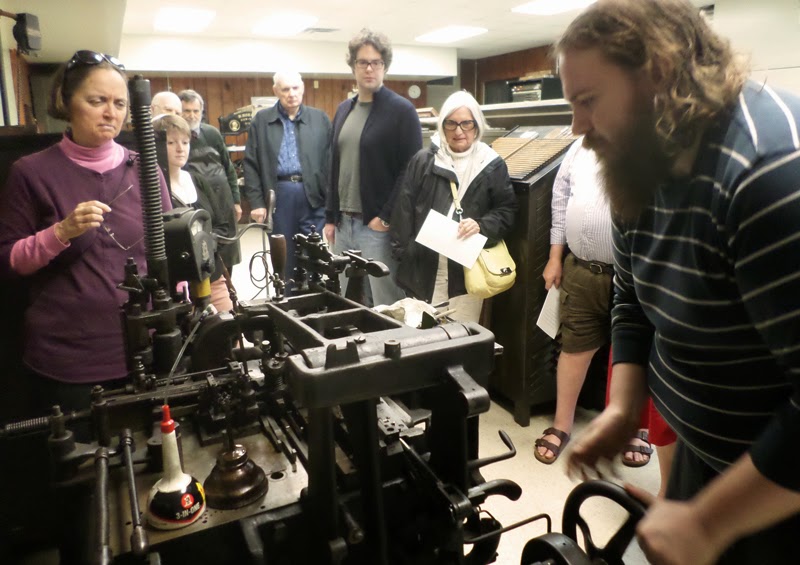 Casting on our Monotype “Orphan Annie” Sorts Caster from the Companion matrices themselves, TBAS Associate Joshua Steward demonstrated how Goudy’s original engraved Companion mats would have been used to cast type for hand-setting and printing. The 36-point Companion Italic capital “G”s that were cast on the machine as part of the demonstration were handed out as small tokens to take home for those who attended. 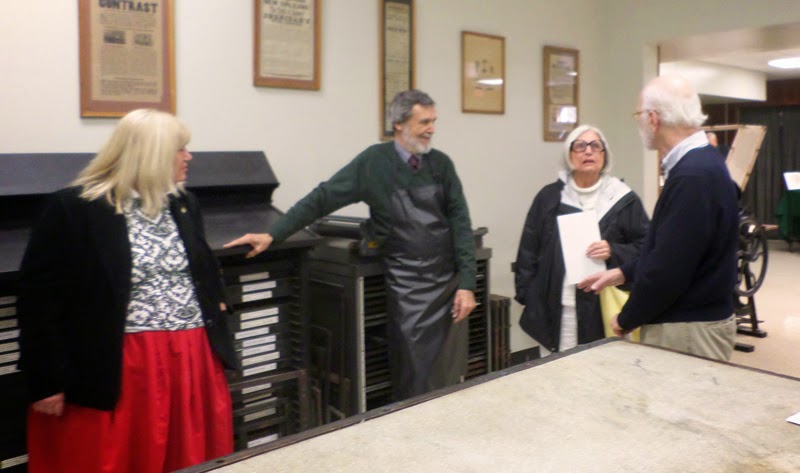 At the Studio’s Vandercook 4 printing press, Richard Mathews assisted attendees to print their own keepsake designed for the occasion and handset in 36-point, 18-point, and 12-point Companion roman and italic types. The broadside included decorative Bruce Rogers ornaments also cast on the Monotype. The broadside design will serve as the basis for a more elaborate limited-edition keepsake for a portfolio of tributes being assembled by the Rochester Institute of Technology as part of their 150th Anniversary of Goudy. 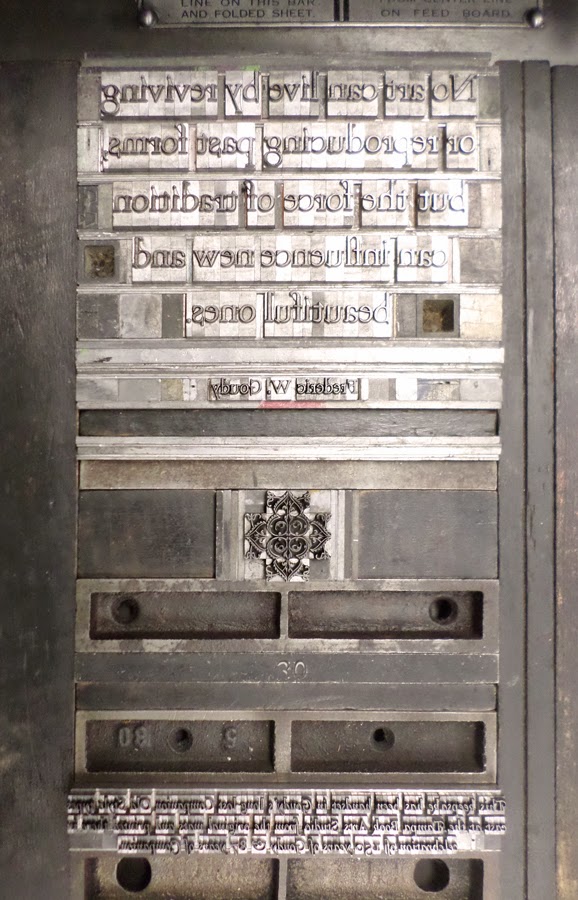 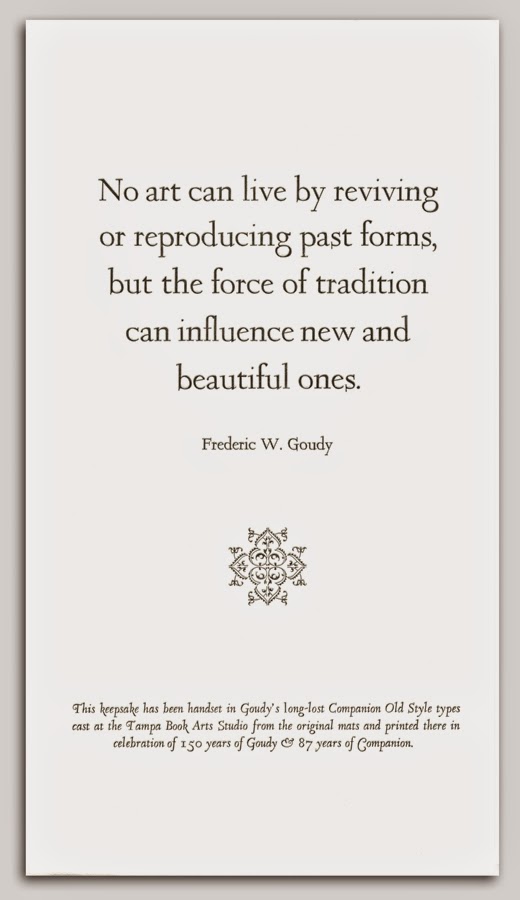 Thanks to those who attended the event and special appreciation to
Rich Hopkins for his Monotype typecasting advice and support
Posted by Tampa Review & Tampa Press at 7:55 AM